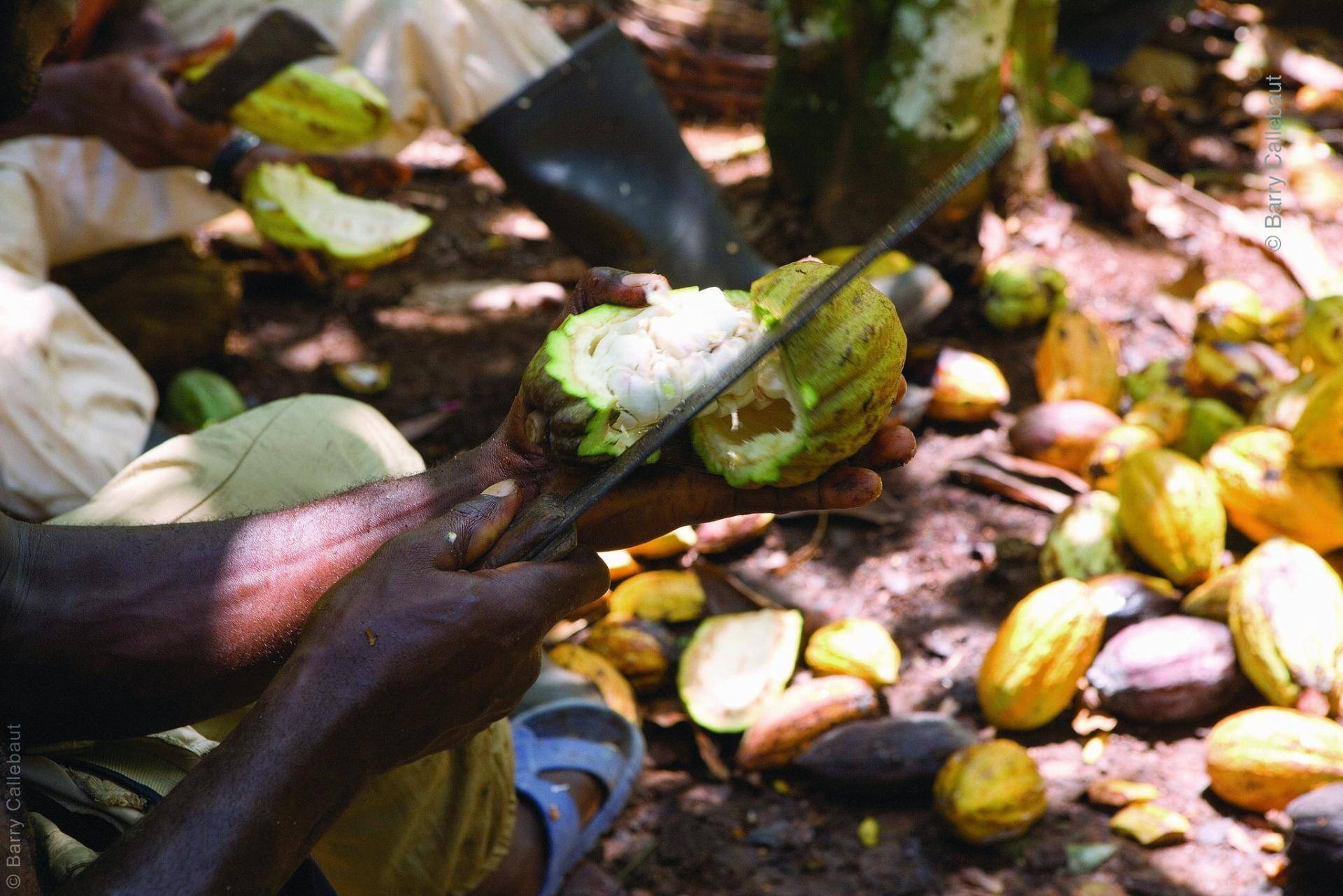 Juergen Steinemann, CEO of Barry Callebaut, said: “Barry Callebaut achieved a strong volume growth in the past fiscal year, significantly beating the market. Thanks to an especially vibrant fourth quarter, we were even able to accelerate our pace. Overall business activity remained solid both in developed and emerging markets. We invested significantly in structures, factories, our Gourmet business and “Sustainable Cocoa”. These deliberate investments, together with the ramp-up costs associated with various partnership agreements, affected our bottom-line results.”

“Despite the current, rather difficult economic environment, especially in Western Europe, we remain positive on delivering on our strategy and reaching our targets. Therefore, we have renewed our mid-term guidance of on average 6-8% growth in volume and EBIT until 2014/154,” said Juergen Steinemann on the outlook. “Our main priority for the next fiscal year is to finalize the various investments in capacities and structures. This will create a sound basis for profitable growth. Other priorities are managing our continued growth through long-term partnerships, Gourmet and emerging markets as well as further increasing our operational efficiency with project “Spring” in Western Europe. We also aim to bring additional innovations to the market and further invest in our sustainability initiative “Cocoa Horizons.”

Barry Callebaut was the first company to receive a positive Scientific Opinion from the European Food Safety Authority (EFSA) on a health claim on cocoa flavanols in July. The company was able to provide evidence that the intake of a defined amount of cocoa flavanols positively influences blood circulation in the human body. In addition, Barry Callebaut also received awards for two of its recent innovations, the Terra Cacao™chocolate based on the company’s patented Controlled Fermentation method, as well as for a special chocolate for a new Magnum® ice cream.

After the sale of the Consumer Products business, Barry Callebaut started a comprehensive reengineering project called “Spring”, mainly focused on Western Europe. The company aims to improve customer service, boost speed-to-market, reduce internal complexities, as well as increase overall efficiency and services to the other Regions.

With “Cocoa Horizons”, Barry Callebaut started the most comprehensive sustainability program in its history, based on its long-time commitment in this area. The focus is on direct and effective investments in the early stages of the cocoa supply chain. Over the next 10 years, Barry Callebaut will invest CHF 40 million in the most important origin countries. Last year, the company mainly funded training of cocoa farmers in Good Agricultural Practices (GAP), as well as in preparing them for certification. In addition, Barry Callebaut started to build a Center of Cocoa Excellence in Côte d’Ivoire and conducted more than 500 Farmer Field Schools during the past fiscal year.

After a slow start, the Food Manufacturers Products business in Western Europe gradually increased sales volume growth with an exceptionally strong fourth quarter. Growth was driven by outsourcing agreements and specialty products, as well as overall market share gains. The Gourmet business showed a good performance in the light of difficult markets in some of the key countries, including Southern Europe. Sales volume at the Beverages division declined slightly due to weather conditions and customer destocking.

In Eastern Europe, both Food Manufacturers Products and the Gourmet & Specialties Products businesses continued to grow at double-digit rates, to which Russia and Poland delivered the biggest contributions.

The U.S. chocolate market decreased by 2.0%, whereas the market in Brazil slowed down its growth pace to +4.7%.5 Barry Callebaut grew significantly faster than the local chocolate markets.

Chocolate markets in Asia continued their solid growth pace at +5.5%.6

In Region Asia-Pacific, Barry Callebaut sustained its double-digit volume growth trajectory of recent years despite some capacity constraints that limited growth opportunities early in the year. Sales volume rose by 10.3% to 57,815 tonnes. The Food Manufacturers Products business increased its sales volume double-digit, particularly driven by strategic partnerships. In the Gourmet business, the company further strengthened its leadership with the global Gourmet brands Callebaut® and Cacao Barry®.

After continuously moving downward until the end of 2011, cocoa prices were range-bound between GBP 1,400 and 1,600 per tonne. Dry weather in Africa and uncertainties about the next main crop as well as the cocoa reform in Côte d’Ivoire put some slight upside pressure on prices end of July.

Prices on the world sugar market corrected significantly downwards whereas EU sugar prices stayed at historically high levels. Milk powder prices initially declined, followed by a strong surge due to the drought in the U.S. Milk powder prices closed at the rather high previous year’s level.

After an initial downward correction, the combined cocoa ratio increased later in the year; overall, it had a neutral effect on Barry Callebaut’s profitability. In addition, the positive volume growth was unable to fully offset increased costs from the ramp-up of strategic partnership agreements including related supply chain and logistic costs as well as from investments in sustainability. Consequently, operating profit (EBIT) declined by 8.9% in local currencies
(-15.7% in CHF) to CHF 65.2 million.

The Board of Directors will propose a payout to shareholders of CHF 15.50 per share (same as 2011), representing a payout ratio of 33% (versus net profit from continuing operations), at the Annual General Meeting of Shareholders on December 5, 2012. The payout will partly consist of a dividend payment from reserves from capital contributions and partly of a capital reduction through par value repayment. The redistribution of these funds to shareholders will not be subject to withholding tax and – for individuals residing in Switzerland and holding the shares as private property – income tax. The payout to shareholders will be executed as of March 4, 2013, subject to approval by the Annual General Meeting of Shareholders and the necessary statutory actions.

All current members of the Board of Directors will stand for re-election for another term of office of one year except for Stefan Pfander. He will step down from the Board at the Annual General Meeting 2012 after serving for seven years. The Board of Directors chaired by Andreas Jacobs expresses its gratitude to Mr. Pfander (1943) for his valuable contributions to the company’s development.

The Board of Directors will propose at the Annual General Meeting that Nicolas Jacobs (1982) be elected as a new member of the Board of Directors. This also reflects the commitment of the majority shareholder, the Jacobs family, to support Barry Callebaut in its further growth. Mr. Jacobs currently holds the position of Senior Director for Global M&A and Development at Burger King Corporation. He has also been a Board Member of Jacobs AG since 2008. Nicolas Jacobs is a significant shareholder of Barry Callebaut AG. (see separate CV)

Barry Callebaut:
With annual sales of about CHF 4.8 billion (EUR 4.0 billion / USD 5.2 billion) for fiscal year 2011/12, Zurich-based Barry Callebaut is the world’s leading manufacturer of high-quality cocoa and chocolate – from the cocoa bean to the finest chocolate product. Barry Callebaut is present in 30 countries, operates around 45 production facilities and employs a diverse and dedicated workforce of about 6,000 people. Barry Callebaut serves the entire food industry focusing on industrial food manufacturers, artisans and professional users of chocolate (such as chocolatiers, pastry chefs or bakers), the latter with its two global brands Callebaut® and Cacao Barry®. Barry Callebaut is the global leader in cocoa and chocolate innovations and provides a comprehensive range of services in the fields of product development, processing, training and marketing. Cost leadership is another important reason why global as well as local food manufacturers work together with Barry Callebaut. Through its broad range of sustainability initiatives and research activities, the company works with farmers, farmer organizations and other partners to help ensure future supplies of cocoa and improve farmer livelihoods.