Over the first six months of the fiscal year we have seen continued volume recovery and solid profitability in a still challenging market environment. The disciplined execution of our ‘smart growth’ strategy, in combination with continuous capability building and the successful sharpening of our business model, are the basis for our improving performance.

The Barry Callebaut Group, the world’s leading manufacturer of high-quality chocolate and cocoa products, reported a continued recovery of its sales volume to 1,071,603 tonnes in the first six months of fiscal year 2020/21 (ended on February 28, 2021), corresponding to a decline of –2.9%. Sales volume in the chocolate business continued to improve and nearly returned to positive territory in the second quarter (–0.2%). In the period under review, this resulted in a –1.0% decline compared to a slightly positive underlying global chocolate confectionery market (+0.8%4) according to Nielsen. The volume recovery was led by Region Asia Pacific (+6.9%) and Region Americas (+4.1%), with positive contributions from the Group’s key growth drivers Emerging Markets (+6.1%, excluding Cocoa) and Outsourcing (+1.8%). Gourmet & Specialties volume further stabilized (–5.8%), despite a still challenging environment, with Gourmet breaking through to positive volume growth in the second quarter. Sales volume in Global Cocoa amounted to 219,153 tonnes, down by –9.6%, as a result of the continued focus on more profitable volume.

Gross profit amounted to CHF 569.2 million and was stable at 0.0% in local currencies (–6.3% in CHF) compared to the first six months of prior year. The volume decline due to the COVID-19 pandemic still had a negative impact on Gross profit, but it was mitigated by a positive mix effect and the continued focus on ‘smart growth’ in the Cocoa business.

Net working capital decreased to CHF 1,579.1 million from CHF 1,838.3 million in the prior-year period. Payables structurally improved and more than offset the increase in inventories and receivables.

Free cash flow generation continued to strengthen in the six months under review and amounted to CHF –183.4 million compared to CHF –359.2 million in the prior-year period. Adjusted for the effect of cocoa beans considered as readily marketable inventories (RMI), the adjusted Free cash flow amounted to a strong CHF 162.9 million (February 29, 2020: CHF –17.9 million).

Whilst the environment remains volatile, our continued focus on customers, our drive for new opportunities and our strong innovation pipeline, together with a sound balance sheet, make us confident that we are coming out of the crisis stronger and to deliver on our mid-term guidance.

Barry Callebaut opened its first fully segregated dairy-free production facility in Norderstedt, Germany, in February 2021. The revamped factory supplies dairy-free chocolate to the European market, tapping into the growing consumer demand for plant-based indulgence. In the same month, Barry Callebaut announced a strategic partnership with a subsidiary of Garudafood, one of the largest food and beverage companies in Indonesia. The partnership will make the compound range of the Van Houten Professional brand available to professional users in the foodservice market in Indonesia.
In March 2021, the Group announced the opening of a new chocolate factory in Baramati, India, the world’s second most populous country and one of the fastest growing chocolate confectionery markets6. The new facility includes an R&D lab and assembly lines capable of manufacturing chocolate and compound in different formats, catering to the needs of international food manufacturers, local confectioneries and semi-industrial bakers and patisseries.

Together with start-up Bloom Biorenewables Ltd, Barry Callebaut is investigating the potential for converting the Group’s production side streams into food ingredients, including flavoring agents. The conversion of nutshells into vanillin, announced in February 2021, is one of the first successes from Barry Callebaut’s collaboration with Bloom, and a direct outcome of the Group’s involvement with MassChallenge, a global open innovation start-up accelerator.
Since its launch in 2016, Caramel Doré, the first premium Belgian caramel chocolate, continues to conquer new markets and applications. In early 2021, this resulted in the launch of “Magnum Double Gold Caramel Billionaire” across various European markets, including Switzerland.
In line with consumers’ desire to explore new exciting tastes, the first cacaofruit gelato mix was introduced by the Italian artisan ice cream supplier Rogelfrut. The new application, developed in partnership with Cabosse Naturals, celebrates the fresh fruity taste of the cacaofruit in a deliciously refreshing fruity sorbet. It will be available to artisans and gelaterias in Italy as of May 2021.

Barry Callebaut continued to drive the simplification and digitalization of its business processes, leveraging its global SAP and Salesforce platforms. In addition, the Group continued to expand the scope of services from its Shared Services Center in Lodz (Poland), which bundles Finance, IT, Procurement and HR activities. These initiatives help Barry Callebaut to improve its business relationship management with customers and suppliers, to control its costs and to maintain business continuity.

Barry Callebaut is committed to nurturing an inclusive environment where everyone is given the opportunity to learn, grow and fulfill their potential. On this basis Barry Callebaut launched in January 2021 ‘#oneBC’, its Diversity & Inclusion strategy. It sets ambitious, measurable targets for the Group to improve its gender balance and cultural diversity at senior management level by 2025.
For the second consecutive year, Barry Callebaut was recognized in February 2021 by CDP as a Supplier Engagement Leader, placing the company in the top 7% of the over 5,600 companies assessed in 2020. CDP is an independent organization which assesses annually industries’ carbon reduction plans as well as companies’ supply chain engagement on climate issues. As part of its Forever Chocolate target to be carbon positive by 2025, Barry Callebaut committed to reducing the carbon impact of its entire supply chain (Scope 1, 2 and 3), which includes the production and processing of all the raw materials that Barry Callebaut sources, and related land use changes.
Barry Callebaut announced in March 2021 the cooperation between Cocoa Horizons and Seekewa, an award-winning start-up from Côte d’Ivoire, on a pilot project to increase and diversify the income of cocoa farmers in the Cocoa Horizons program. Income diversification is a key element of Barry Callebaut’s strategy for lifting cocoa farmers out of poverty. The collaboration with Seekewa is another direct outcome of the Group’s involvement with the start-up accelerator MassChallenge.

6 The sales volume of chocolate confectionery in India grew at a CAGR of +9% between 2014-2019, according to Nielsen.

Sales volume of Barry Callebaut in Region EMEA (Europe, Middle East and Africa) amounted to 481,862 tonnes, a decline of –5.0% in the first six months. Despite the still challenging environment due to ongoing COVID-19 restrictions in major European markets7, the volume recovery continued in the second quarter (–3.0%), led by a good performance in Eastern Europe. Food Manufacturers’ volume growth improved after seasonally lower activities, in particular in Eastern Europe, but overall still saw a mid-single digit decline. Gourmet & Specialties volume overall still declined in the low teens, however a strong recovery was visible in Eastern Europe. Sales revenue declined by –2.6% in local currencies (–5.6% in CHF) to CHF 1,496.0 million. Operating profit (EBIT) amounted to CHF 178.3 million, up +2.2% in local currencies (–3.0% in CHF) on the back of strict cost discipline and an improving mix effect.

Region Americas grew its sales volumes by +4.1% to 299,253 tonnes, well ahead of the underlying regional chocolate confectionery market7. Volume growth was supported by both Food Manufacturers and Gourmet. The strong growth with large corporate accounts continued in particular in North America. Gourmet & Specialties volume returned to positive territory, supported by a robust recovery in South America. Sales revenue increased by +3.6% in local currencies (–7.2% in CHF) and amounted to CHF 870.7 million. Operating profit (EBIT) grew by +5.8% in local currencies (–5.5% in CHF) to CHF 89.7 million on the back of good volume growth and an improving mix.

Sales volume momentum accelerated in Region Asia Pacific and was back to double-digit growth in the second quarter. In the first six months under review, sales volume reached 71,335 tonnes, up +6.9%, well ahead of the regional chocolate confectionery market7. The mid-single digit growth in Food Manufacturers was broad based. Gourmet volumes are back to double-digit growth, led by key markets such as China, India and Taiwan. Sales revenue amounted to CHF 221.1 million, up +9.2% in local currencies (+2.7% in CHF). Operating profit (EBIT) increased by +10.4% in local currencies (+1.9% in CHF) to CHF 28.2 million on the back of accelerated volumes and improving product mix.

Sales volume in Global Cocoa declined by –9.6% to 219,153 tonnes in the first six months under review. The decline reflects the Group’s focus on ‘smart growth’, proactively balancing volume and profit. The Group is committed to the disciplined application of the ‘Living Income Differential’ (LID). Sales revenue amounted to CHF 893.7 million, down –1.2% in local currencies (–12.7% in CHF). Operating profit (EBIT) amounted to CHF 47.7 million, a decline of –6.9% in local currencies (–13.6% in CHF) compared to EBIT recurring8 in the prior-year period.

During the first six months of fiscal year 2020/21, terminal market9 prices for cocoa beans fluctuated between GBP 1,608 and GBP 1,869 per tonne and closed at GBP 1,768 per tonne on February 28, 2021. On average, cocoa bean prices decreased by –9.4% versus the prior-year period. Global bean supply and demand showed a surplus.

World sugar prices increased on average by +12.0% on the back of strong demand from China and delayed Indian exports. Sugar prices in Europe remained on average fairly stable (–2.0%) compared to the demand-related lower prices at the beginning of the COVID-19 pandemic in the prior-year period.
Dairy prices continued to increase on the back of strong demand from Asia and some supply chain constraints. However, on average prices in the period under review were –10.6% lower compared to the same prior-year period.

More detailed financial information can be found in the “Half-Year Results 2020/21 Report”.

Media and Analyst Webcast/Call of the Barry Callebaut Group

The call can be followed via telephone and/or webcast. Access details can be found here. 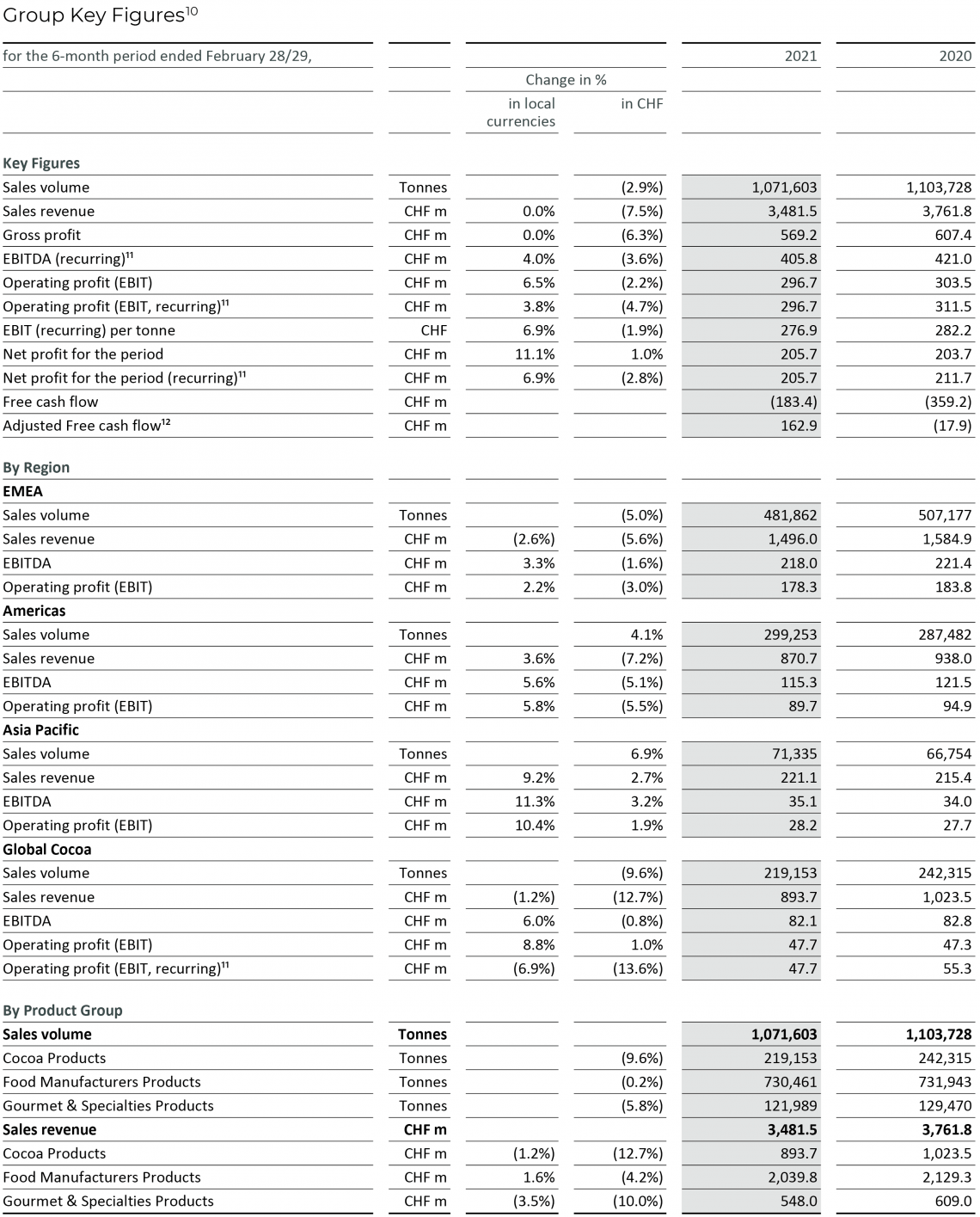 10Financial performance measures, not defined by IFRS, are defined in the Annual Report 2019/20 on page 182.
11Prior-year Operating profit (EBIT) recurring and Net profit recurring exclude the cost of CHF 8.0 million for the closure of the cocoa factory in Makassar (Indonesia).
12Free cash flow adjusted for the cash flow impact of cocoa bean inventories regarded by the Group as readily marketable inventories (RMI).

With annual sales of about CHF 6.9 billion (EUR 6.4 billion / USD 7.1 billion) in fiscal year 2019/20, the Zurich-based Barry Callebaut Group is the world’s leading manufacturer of high-quality chocolate and cocoa products – from sourcing and processing cocoa beans to producing the finest chocolates, including chocolate fillings, decorations and compounds. The Group runs more than 60 production facilities worldwide and employs a diverse and dedicated global workforce of more than 12,000 people.