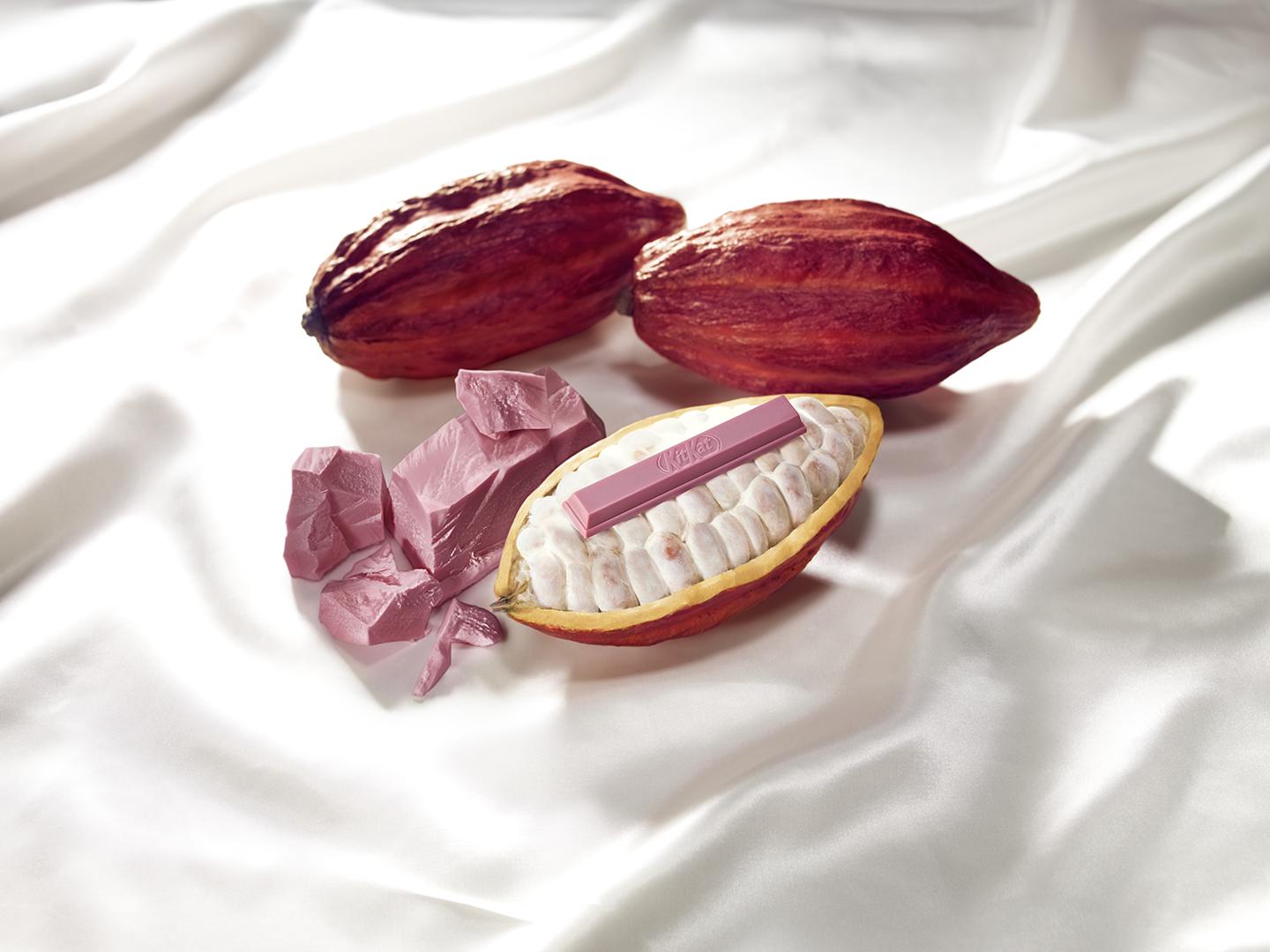 On January 19, Nestlé Japan Ltd. will launch the Ruby chocolate version of its iconic KITKAT® brand in KITKAT® Chocolatory® stores in Japan and South Korea, as well as online. KITKAT® is the first to offer this fourth type of chocolate - next to Dark, Milk and White - to consumers, just five months after Ruby chocolate was introduced. Ruby chocolate was created by Barry Callebaut, the world’s leading manufacturer of high-quality chocolate and cocoa products. ‘KITKAT® Chocolatory® Sublime® Ruby’ will be available from Friday, January 19, in time for Valentine’s Day.

Since the announcement in Shanghai on September 5, 2017, Ruby chocolate has been attracting strong interest from chocolate connoisseurs throughout the world. The Ruby chocolate used in ‘KITKAT® Chocolatory® Sublime® Ruby’ has a fresh berry-fruity taste and characteristic color. Ruby chocolate is made from the Ruby cocoa bean. No berries, berry flavor nor color are added. The bean has a specific set of attributes, which Barry Callebaut managed to unlock through an innovative process that took many years to develop.​

‘Sublime® Ruby’ was created through the craftsmanship of top pâtissier Yasumasa Takagi. It will be available for purchase in the KITKAT® Chocolatory® stores as well as online. KITKAT® Chocolatory® is a specialty store in Japan and South-Korea selling premium KITKAT® chocolates created with meticulous attention to ingredients and preparation methods under the direction of Yasumasa Takagi, owner-chef of Le Pâtissier Takagi.

Antoine de Saint-Affrique, CEO of Barry Callebaut: “I am very pleased that our innovative breakthrough Ruby chocolate has come to life so quickly through our partnership with Nestle and the pioneering KITKAT® Brand in Japan. Nestle was very quick in spotting the trend and in introducing a Ruby chocolate version of KITKAT®, which will entice consumers across Asia and beyond.”

KITKAT®
A chocolate brand launched in the U.K. in 1935, which is now sold in more than 100 countries around the world. In Japan, KITKAT® products have been long been sold under the slogan “I know my wish will come true (kit)”, making them popular as a communication tool for expressing support and gratitude and other messages to loved ones and so on, especially to students sitting entrance exams during exam season, but also people who are working hard to achieve other kinds of goals throughout the year. The release of a wide range of flavors including Matcha, Japanese Sake flavor, and the “KITKAT® Chocolatory®” series produced under the supervision of a popular patissier, has made Japanese KITKATs highly popular both in Japan and abroad.

KITKAT®  Chocolatory®
KITKAT® Chocolatory® represents the world’s first KITKAT® specialty store. It has been involved in the development of new KITKAT® products since 2003 under the complete management and supervision of Yasumasa Takagi, owner and head chef of Le Patissier Takagi, who has helped to make KITKAT® even more appealing through the development of several new innovative KITKAT® products. The name “chocolatory” represents a combination of the terms chocolatier and chocolate factory. KITKAT® Chocolatory® aims to be a shop where customers from many different age groups can interact and experience new fun and breaks by indulging in the attention to quality and detail of chocolatiers and the excitement of a chocolate factory.

Yasumasa Takagi
Born in 1966, Takagi had spent four years in Europe. After undergoing training at famous restaurants such as Anficless (2 stars), Mauduit, and Vergne, Takagi served as the Decoration Chef at Overwise. Later he became the first Japanese Chef pâtissier at JC Glupow. In 1992 at the age of 26, Takagi became the youngest Japanese chef to win the Gastronomical Pageant, Europe’s most revered cooking contests. Today, Takagi is the owner and head chef of Le Patissier Takagi, which operates four shops in Tokyo, with its flagship store in Fukazawa, Setagaya Ward. He is a certified instructor at the Federation of Japan Confectionery Associations and serves as a Director of the Tokyo Confectionery Associations.