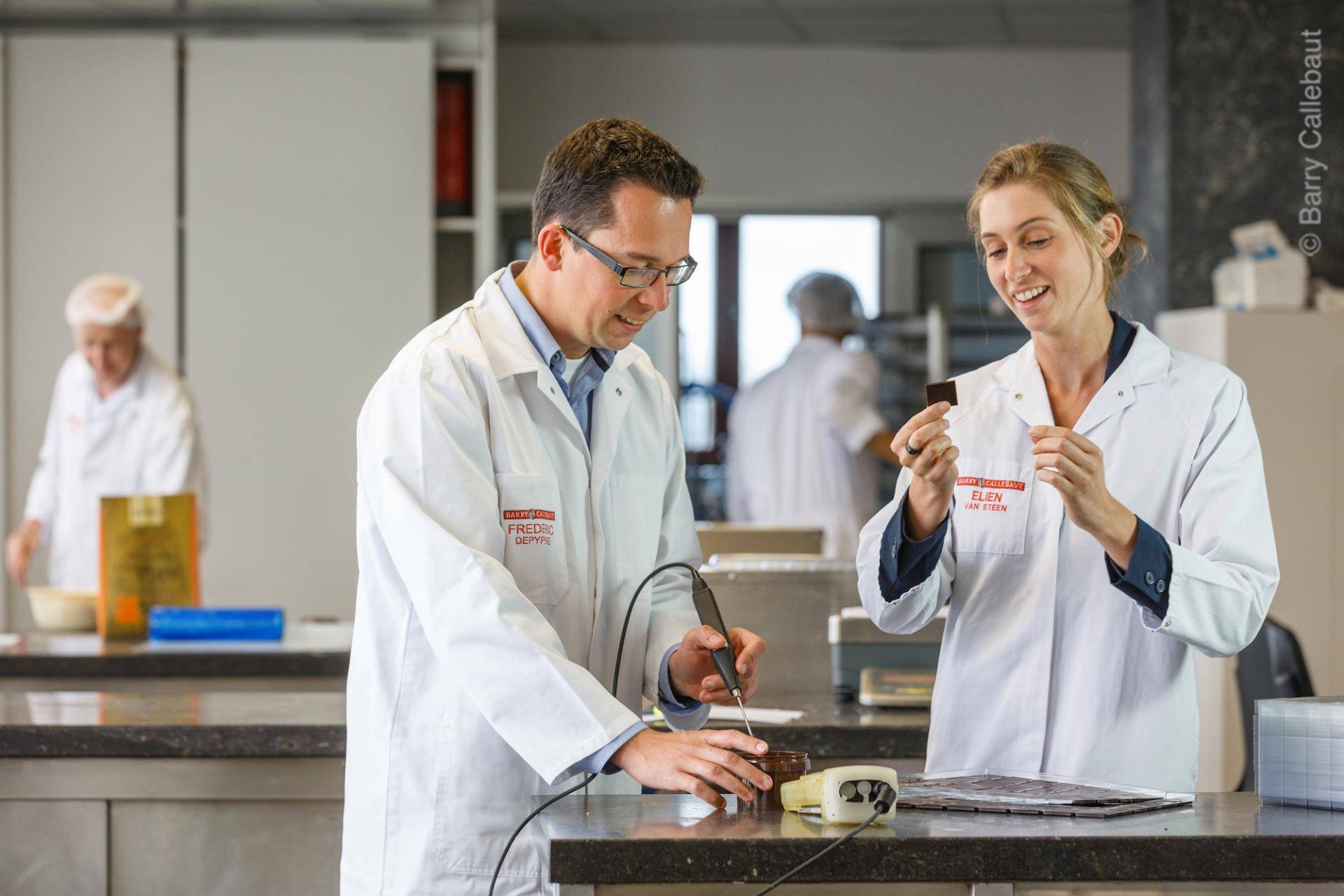 Juergen Steinemann, CEO of the Barry Callebaut Group, said: “As forecasted, we had a good second quarter after a slow start to the year. Our volume growth accelerated, much in contrast to the currently weak global chocolate confectionery market. All growth drivers contributed to our growth, especially outsourcing & partnerships and Gourmet. Our business in our main regions Western Europe and Americas performed particularly well. Despite a weak cocoa products market and a negative currency translation effect, we significantly improved our profitability thanks to our continued focus on product mix, margins and cost management.”

During the first half of fiscal year 2014/15 (ended February 28, 2015), the Barry Callebaut Group – the world’s leading manufacturer of chocolate and cocoa products – increased its sales volume by 2.0% to 893,437 tonnes, supported by its growth drivers outsourcing and Gourmet. With +3.9%, volume growth accelerated in the second quarter. This solid growth was achieved amid a currently weak global confectionery market that declined by -1.5% in volume.1
From a regional perspective, volume growth was particularly good in the Group’s main regions Western Europe and Americas. Volume growth further benefited from a strong performance of the two global Gourmet brands Callebaut® and Cacao Barry®, boosting overall sales volume in the Gourmet & Specialties Products business significantly by 6.0%.

Gross profit went up 5.8% (+9.5% in local currencies) to CHF 446.2 million as a result of a more favorable product mix (more focus on specialty products and Gourmet). Overall, though, the combined cocoa ratio had a negative impact on the profitability of the Group’s cocoa processing activities.

Net profit was up 10.7% (+16.3% in local currencies) to CHF 132.4 million, driven by the solid EBIT performance.
Overall, the currency translation impact on the Group’s EBIT level was CHF -8.7 million, resulting in part from the recent appreciation of the Swiss franc against the euro.

Outlook – Growth of top- and bottom-line expected to continue; targets confirmed
CEO Juergen Steinemann on the outlook: “We expect sales volume growth to further accelerate in the second half of our fiscal year, supported by all growth drivers. Our focus on product margins and cost control will drive further profitable growth, which will help to offset the challenging cocoa market. Subject to the expected negative currency translation impact on our bottom-line, we confirm our mid-term targets4.”

Across Europe the chocolate confectionery markets decreased by about -1.1%5.
In contrast to this, Region Europe grew its total sales volume by 2.1% to 386,730 tonnes, accelerating the pace of growth in Q2 (+3.7%). Top-line growth in Western Europe showed an excellent performance across all segments driven by a strong development in the industrial business and a double-digit increase in the Beverages business. The Gourmet business regained its growth momentum. EEMEA had to cope with the difficult political and economic environment in Russia. Despite this, the Gourmet business performed well.

Operating profit (EBIT) rose significantly by 15.8% (21.9% in local currencies) to CHF 157.2 million, supported by both Western Europe and EEMEA. The strong overall profitability was achieved thanks to the market launch of new innovations, accelerated sales of specialties, a dedicated focus on the Gourmet business and positive effects from the implementation of Project Spring in Western Europe.

Operating profit (EBIT) rose strongly by +12.4% (+9.5% in local currencies) to CHF 67.3 million thanks to the higher sales volume, margin improvements across all businesses and in all markets as well as good cost management.

Chocolate markets across Asia Pacific declined by -2.4%7.
Total sales volume of the Group in Region Asia Pacific grew 5.8% to 36,326 tonnes, yet slowed down in Q2 as a result of an overall sluggish market demand. Volume growth was driven by both Barry Callebaut’s industrial and especially the Gourmet businesses, with excellent growth in both global and local Gourmet brands.

Sales revenue in Region Asia Pacific was up 11.6% (+13.1% in local currencies) to CHF 146.5 million, fueled by the volume growth, an improved product mix and higher cocoa bean prices.

Sales volume in the segment Global Cocoa increased by 1.2% to 248,813 tonnes, accelerating in Q2 (+4.4%), mostly driven by sales of cocoa products to corporate customers. Barry Callebaut is taking further steps towards leadership to cope with the currently challenging cocoa products market.

After reaching a three-year high in September, above GBP 2,100 level, cocoa market prices continued to drop until the end of January, mainly as a result of a better than expected main crop in Côte d’Ivoire as well as low Q4/2014 grinding figures. At the beginning of February, cocoa prices rallied again. A very poor Ghanaian crop lifted prices back above GBP 2,000 (closing at GBP 2,026 on February 27, 2015).

Short-term, Barry Callebaut expects cocoa prices to move lower due to a good mid-crop prospect in Côte d'Ivoire, lower worldwide grinds and slow chocolate confectionery markets.
As a result of good surplus stocks from previous campaigns, funds building a short position and a weakening of the Brazilian Real, sugar prices on the world market continuously decreased. After an initial decline, European sugar prices have stabilized at a historically low level.

After hitting a 5-year low last December as a result of strong global dairy production, market prices for milk powder rebounded. Fears of a drought in New Zealand changed the market sentiment along with an overall increase in demand, also in European markets. End of February 2015, milk powder prices were back at the levels from the beginning of Barry Callebaut’s fiscal year 2014/15.

Barry Callebaut:
With annual sales of about CHF 5.9 billion (EUR 4.8 billion / USD 6.5 billion) in fiscal year 2013/14, the Zurich-based Barry Callebaut Group is the world’s leading manufacturer of high-quality chocolate and cocoa products – from the origination and processing of cocoa beans to producing the finest chocolates, including chocolate fillings, decorations and compounds. The Group runs more than 50 production facilities worldwide and employs a diverse and dedicated global workforce of over 9,300 people.
The Barry Callebaut Group serves the entire food industry, from industrial food manufacturers to artisanal and professional users of chocolate, such as chocolatiers, pastry chefs, bakers, hotels, restaurants or caterers. The two global brands catering to the specific needs of these Gourmet customers are Callebaut® and Cacao Barry®.
The Barry Callebaut Group is committed to sustainable cocoa production through its “Cocoa Horizons” initiative to help ensure future supplies of cocoa as well as improve farmer livelihoods.

2: As of consolidation of the acquired cocoa business: 6-8% average volume growth per year, and EBIT per tonne restored to pre-acquisition level by 2015/16 (CHF 256 per tonne) – barring any major unforeseen events and subject to currency translation impacts.

3. The Barry Callebaut Group passes on raw material prices to customers for the majority of its business.

4. As of consolidation of the acquired cocoa business: 6-8% average volume growth per year, and EBIT per tonne restored to pre-acquisition level by 2015/16 (CHF 256 per tonne) – barring any major unforeseen events and subject to currency translation impacts.