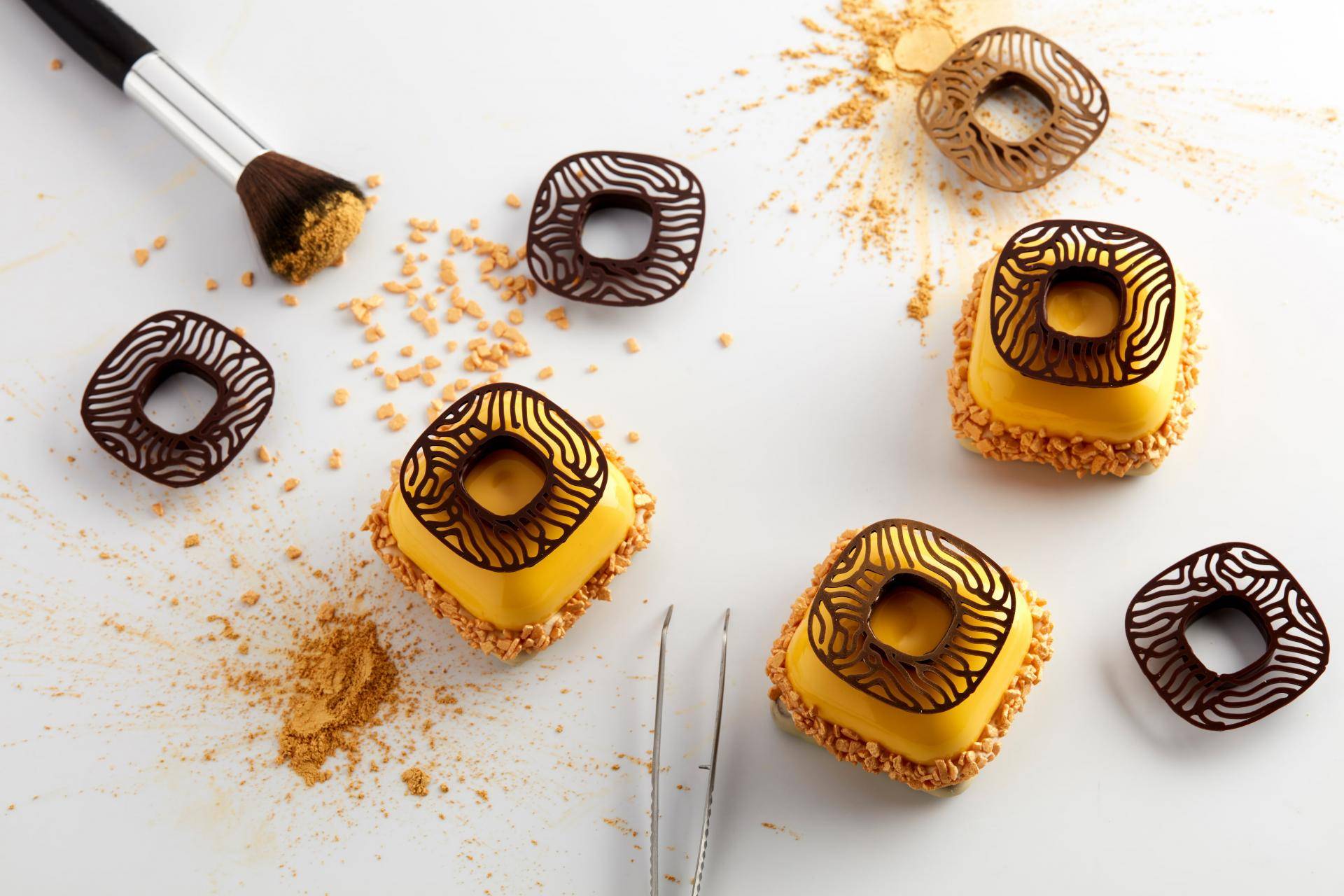 With Wieze fully operational since end of October and against a strong comparator, we had, as expected, a slow start to the year. In markets where Gourmet products were widely available, we continued to win. We are committed to achieve our current 3-year mid-term guidance in this final year, based on our broad product portfolio and broad geographic and customer base.

The Barry Callebaut Group, the world’s leading manufacturer of high-quality chocolate and cocoa products, reported sales volume of 578,694 tonnes during the first three months of the fiscal year 2022/23 (ended on November 30, 2022). Volume was down -5.1%, in an overall declining market according to Nielsen (-2.8%)3. The chocolate business was down by -5.8%, due to residual effects from the Wieze ramp-up and against a particularly strong comparator of +9.6% in the same quarter in prior year. This affected all Regions, in particular EMEA (-8.5%). The Group's Key Growth Drivers Emerging Markets (-3.8%), Outsourcing (-0.1%) and Gourmet & Specialties (-11.2%) had a slow start. Excluding the delayed impact due to the Wieze ramp-up, Gourmet & Specialties volume would have been flat against a record high comparator (+33.8%).

Sales revenue amounted to CHF 2,110.3 million, an increase of +7.2% in local currencies (+3.8% in CHF), clearly higher than volume growth. The increase was driven by higher raw material prices and the inflationary environment, which Barry Callebaut manages through its cost-plus pricing model for the majority of its business, and positive mix components.

We expect a more back-end loaded year with improvements in the coming quarters as the Wieze factory is fully back on stream and Gourmet products are more widely available. Our consistent long-term growth strategy and its successful execution give us the confidence to issue a new 3-year mid-term guidance for 2023/24 to 2025/26 focusing on accelerated value creation. The new guidance consists of on average +4-6% volume growth and +8-10% EBIT growth in local currencies, with further ROIC improvement.

Expansion: Barry Callebaut announced in December 2022 the next phase in the expansion of its Chatham factory in Ontario, Canada. The investment includes both liquid and molding lines, as well as enhanced capabilities for the production of dairy-free compound to accommodate growing customer demand for plant-based indulgence. These investments will enable Barry Callebaut to continue to drive long-term growth in North America.
In November 2022, Barry Callebaut announced the groundbreaking of its new chocolate and compound factory in Neemrana, about 120 km southwest of Delhi, its third manufacturing facility in India. Upon completion of the factory, India will become Barry Callebaut’s largest chocolate manufacturing footprint in Region Asia Pacific.

Cost Leadership: In January 2023, Barry Callebaut celebrated the official opening of its Business Excellence Center (BEC) in the Greater Kuala Lumpur Area, Malaysia. The Business Excellence Center bundles shared services in Finance and other corporate services, such as Customer Service and Information Technology, for Region Asia Pacific. Together with the existing Shared Services Center in Lodz, Poland, this further increases operational efficiency and strengthens the Group's cost leadership.

Sustainability: In December 2022, Barry Callebaut published its 6th Forever Chocolate progress report, presenting the achievements on its journey to make sustainable chocolate the norm. The Group continued to scale up its activities by partnering with customers as well as societal and industry stakeholders to create tangible impact on the ground. One of its key achievements in the past fiscal year was that with the support of its customers, Barry Callebaut increased the proportion of products sold containing 100% sustainable cocoa or chocolate to one in two products. The full report can be accessed here.
Barry Callebaut has been recognized for leadership in corporate transparency and performance on forests by the global environmental non-profit organization CDP for the second year in a row. Barry Callebaut is one of only 25 high-performing companies that achieved an ‘A’ rating, out of nearly 15,000 companies. CDP’s annual environmental disclosure and scoring process is widely acknowledged as the gold standard for corporate environmental transparency and action.

Region EMEA – Residual effects from Wieze ramp-up weigh on volume
Sales volume in Region EMEA (Europe, Middle East and Africa) still experienced residual effects from the Wieze factory ramp-up, leading to a volume decline of -8.5% to 261,902 tonnes. Excluding the ramp-up effect, volume in the first quarter would have grown in the low single-digit range and therefore well above the declining regional chocolate confectionery market (-4.5%)4. Food Manufacturers volume improved compared to the fourth quarter of last fiscal year, but lagged behind the prior-year quarter, as Wieze became fully operational as of end of October. The Gourmet & Specialties business was affected as expected by the delayed impact on volume due to Wieze. Sales revenue in the Region amounted to CHF 902.6 million, up +6.2% in local currencies (-2.0% in CHF). While currency movements led to a highly negative translation impact on sales revenue, Barry Callebaut has been able to pass on higher prices amid the general inflationary environment.

Region Americas – Temporary destocking and delayed orders
Sales volume in Region Americas experienced a slow start of -2.4% to 160,908 tonnes in the first three months of fiscal year 2022/23, in line with the underlying regional chocolate confectionery market (-2.2%)5. Food Manufacturers was impacted by a more cautious environment, leading customers to prioritize destocking and delaying orders. Gourmet & Specialties volume growth continued in key markets with strong local brands, such as Brazil. However, volume in North America suffered from the limited availability of global brands due to the delayed effect from the ramp-up in the Wieze factory. Sales revenue amounted to CHF 595.5 million, up +7.9% in local currencies (+14.3% in CHF).

Region Asia Pacific – Mixed country performances
Sales volume in Region Asia Pacific remained about flat at +0.1% at 39,543 tonnes in the first three months of fiscal year 2022/23, softer than the underlying regional chocolate confectionery market (+3.2%)5. The performance of Food Manufacturers varied strongly with continued double-digit growth in key markets such as India and China, while in Japan and Indonesia customer volumes were impacted by pricing actions to compensate for inflation, leading to low single-digit growth. Gourmet & Specialties volume was down due to limited availability of global brands, a delayed effect from the ramp-up in the Wieze factory. In addition, it was impacted by lockdowns in China, which had a negative effect on out-of-home consumption. Australia returned to a positive growth trajectory. Sales revenue amounted to CHF 136.0 million, up +6.2% in local currencies (+2.5% in CHF).

Price developments of key raw materials
During the first three months of fiscal year 2022/23, terminal market6 prices for cocoa beans fluctuated between GBP 1,822 and GBP 2,052 per tonne and closed at GBP 1,994 per tonne on November 30, 2022. On average, cocoa bean prices increased by +8.1% versus the prior-year period. Global bean supply and demand for the 2021/22 crop ended with a deficit, after two years of sizable surpluses, leading to an overall more balanced situation.
Sugar prices in Europe were on average +91.9% higher than in the prior-year period, mainly due to low stocks and high energy prices. The world market price for sugar was on average +1.4% higher than in the prior-year period, on the back of lower Indian sugar exports.
Dairy prices increased on average by +15.7% compared to the first three months of prior year. Following peak prices in April 2022, dairy prices have softened. However, production is expected to recover only slowly as the costs of production combined with labor availability remain limiting factors. 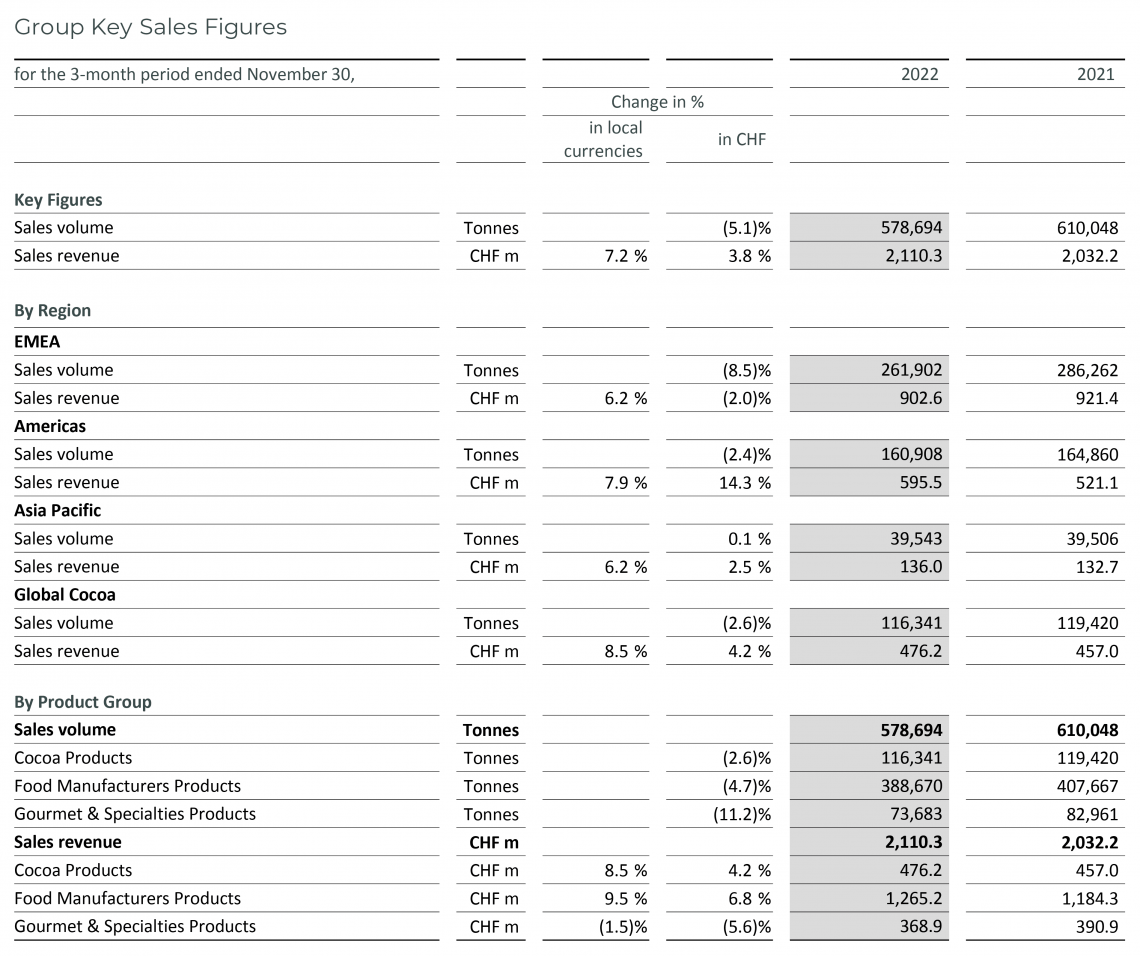 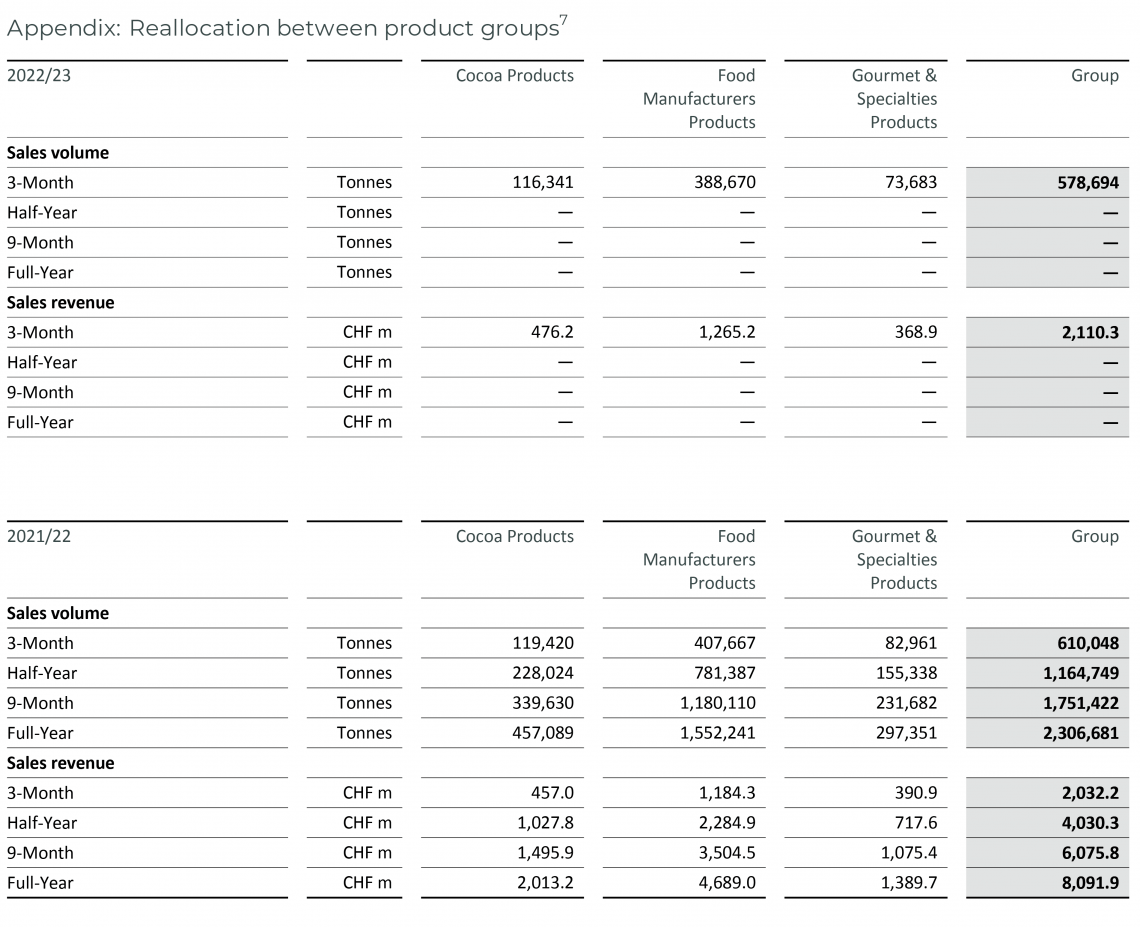