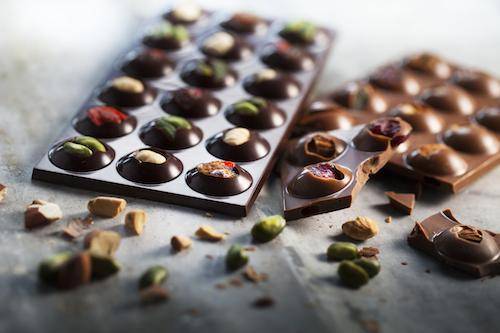 Antoine de Saint-Affrique, CEO of the Barry Callebaut Group, said: “I am delighted to announce a strong set of results. We saw a good performance across all our Regions and Product Groups at top and bottom-line level. We keep delivering on our ‘smart growth’ agenda, which is reflected in the improvement of all our Group key financial metrics.”

Gross profit increased by +14.6% in local currencies (+14.3% in CHF) and came in at CHF 986.7 million, mainly driven by volume growth, the product and customer mix, as well as the restored profitability of the Global Cocoa business.In fiscal year 2016/17 (ended August 31, 2017), the Barry Callebaut Group – the world’s leading manufacturer of high-quality chocolate and cocoa products – increased its sales volume by +4.4% to 1,914,311 tonnes, which is well above the global confectionery market growth rate of +0.1%1. The fourth quarter saw an acceleration to +9.2%. The good momentum was supported by all key growth drivers: Gourmet & Specialties (+9.7%), Outsourcing (+9.3%) and Emerging Markets (+5.9%), further helped by an improved market environment. The intentional phase-out of less profitable cocoa contracts, amounting to 50,000-60,000 tonnes overall, was completed; sales volume growth in Global Cocoa for the year was +0.4%. At the same time, the Chocolate business grew by +5.6% with a strong performance in all regions. Sales revenue was up +1.2% in local currencies (+1.9% in CHF) to CHF 6,805.2 million, as a result of a good product mix, offset by lower cocoa bean and cocoa product prices.

Net working capital decreased by –17.8% from CHF 1,374.2 million in prior year to
CHF 1,129.5 million. This is the result of the Group’s continued focus on reducing inventories, with significant tailwind from low cocoa bean prices, as well as some positive one-off items.

Free cash flow2 was exceptionally strong and amounted to CHF 475.6 million, compared to CHF 430.9 million in the previous fiscal year. This is the consequence of a stronger operating profit, lower working capital, as mentioned above, and continued discipline on capital expenditure (CAPEX).

Looking ahead, CEO Antoine de Saint-Affrique said: “We will continue to deliver on our ‘smart growth’ strategy. A more supportive cocoa products market and slightly improving global demand for chocolate, together with the consistent execution of our strategy, give us confidence to extend our mid-term guidance to fiscal year 2018/19: We are targeting 4-6% volume growth, and EBIT above volume growth in local currencies on average for the 4-year period 2015/16 to 2018/19, barring any major unforeseen events.”

Barry Callebaut’s sales volume in Region EMEA went up by +6.4% to 866,498 tonnes. The market, in contrast, declined by –0.5%3 Overall, sales revenue rose +6.4% in local currencies (+5.9% in CHF) and amounted to CHF 2,900.2 million. Operating profit (EBIT) was significantly up by +9.8% in local currencies (+9.2% in CHF); recurring operating profit was up by +3.6% in local currencies (+3.0% in CHF), slightly below volume growth, reflecting a less favorable product mix and investments in future growth. The acquisition of the Halle factory in Belgium from Mondelēz International, combined with the extension of the strategic partnership with this customer, and the acquisition of D'Orsogna Dolciaria in Italy as well as further capacity expansions in Europe, are investments with the clear objective to cater for future growth and to serve European customers better.

In Region Americas, sales volume increased by +2.2% to 518,359 tonnes, whereas the chocolate confectionery market grew by +0.6%4. Sales revenue rose +1.5% in local currencies (+2.8% in CHF) to CHF 1,668.7 million. Operating profit (EBIT) for the region was up +9.2% in local currencies (+9.0% in CHF), as a consequence of a positive product mix and further cost leverage in the region. Barry Callebaut also made significant investments in the U.S. for additional manufacturing capacity and warehousing. In addition, Barry Callebaut announced the acquisition of Gertrude Hawk Ingredients in October 2017. All these investments place the company in an even better position to serve its customers and to capture future growth.

Sales volume in Region Asia Pacific rose by +19.1% to 91,020 tonnes. In contrast, the chocolate market in the region grew by +3.1%4. The Group’s above-market development was fuelled by fast growth in countries such as China and Indonesia, both in Gourmet and in Food Manufacturers, as well as by the ramp-up of the long-term supply agreement with GarudaFood in Indonesia. Sales revenue rose by +12.7% in local currencies (+13.4% in CHF) to CHF 347.9 million. Operating profit (EBIT) grew by +20.2% in local currencies (+20.2% in CHF), driven by volume growth and a strong Gourmet business.

The successful implementation of the Cocoa Leadership project with a number of different initiatives has delivered in line with expectations. Sales volume to third-party customers was basically flat at +0.4% and amounted to 438,434 tonnes. Sales revenue declined by –7.7% in local currencies, (–6.0% in CHF), due to lower cocoa products prices. Operating profit (EBIT) significantly increased by CHF 47.2 million and amounted to a total EBIT of 64.9 million, driven by the good results from the Cocoa Leadership project and the more favorable market conditions in the cocoa products market.

Over the fiscal year 2016/2017, cocoa bean prices experienced a steep drop of –34%, from GBP 2,304 per tonne on September 1, 2016 to GBP 1,522 per tonne on August 31, 2017. On average for fiscal year 2016/17, cocoa bean prices declined by –21% versus prior year. The price correction ended a three-year bull market. Favorable weather conditions and an increase in farm gate prices for the main crop of top producers Côte d’Ivoire and Ghana accelerated production and led to the biggest surplus in the last six years, triggering the steep price erosion.

Sugar prices tumbled by –40% due to a potential surplus of 5 million tonnes of sugar for 2017/18 compared to a deficit of 4.3 million tonnes in 2016/17. In Europe, the prospect of a bumper crop in 2017/18 combined with the change in the European sugar regime, eliminating production and export quotas, led to a progressive price decrease over the year.

There was a considerable decrease of global dairy production from autumn to spring, leading to an increase in prices. Beginning of 2017, producers around the globe started receiving higher payout prices for liquid milk, motivating them to increase production.

Payout to shareholders
The Board of Directors will propose a payout to shareholders of CHF 20.00 per share at the Annual General Meeting of Shareholders on December 13, 2017, an increase of +29% versus prior year. This represents a payout ratio of 36.3% of the net profit (38.5% of the recurring net profit). The proposal foresees that the payout will be effected partly in the form of a capital repayment by way of par value reduction (CHF 7.27 per share) and partly through a cash dividend (CHF 12.73 per share). The distribution of the part related to capital reduction will not be subject to withholding tax or – for individuals who are taxed in Switzerland and hold the shares privately – income tax. The dividend will be paid to shareholders on March 2, 2018, subject to approval by the Annual General Meeting of Shareholders.

Board of Directors
Two Board members will not stand for reelection at the AGM 2017:
After twenty years on Barry Callebaut’s Board, Andreas Schmid has decided to retire from that function. Andreas Schmid has helped building the foundations of Barry Callebaut’s success since 1997 when he was appointed CEO of Jacobs Holding, Barry Callebaut’s major shareholder. In 1999 he became Chairman and CEO of Barry Callebaut. In 2002, he handed over the CEO function but continued to serve as Chairman until 2005. He was Vice-Chairman until 2014 and then served as ordinary Board member. – Wai Ling Liu who was elected to the Board in 2014 has also decided to step down in order to pursue other professional opportunities.

The Board of Directors would like to express its sincere gratitude to Andreas Schmid for his passion for Barry Callebaut and his outstanding contribution to the development of the company over so many years, and to Wai Ling Liu for her valuable contribution on strategic topics such as market and talent development.

The Board of Directors will propose Elio Leoni Sceti as new Board member. Elio Leoni Sceti (born 1966, Italian national) is the Chairman of LSG Holdings (a UK-based family office with interests in real estate, private equity and venture capital), a non-executive Director of ABInbev and an active investor and board advisor in early stage technology companies. Elio Leoni Sceti can look back on a successful international career, including about 25 years in Food and FMCG companies.

All other members of the Board will stand for reelection for another term of office of one year.