The Barry Callebaut Group, the world’s leading manufacturer of high-quality chocolate and cocoa products, increased its sales volume by +5.4% to 1,103,728 tonnes in the first six months of fiscal year 2019/20 (ended on February 29, 2020). Sales volume in the chocolate business grew by +5.2%, well above the flat global chocolate confectionery market (–0.0%)5 according to Nielsen. Growth was supported by all Regions and key growth drivers: Outsourcing (+1.8%), Emerging Markets (+10.6%) and Gourmet & Specialties (excluding Beverage, +3.6%). Sales volume in Global Cocoa grew +6.5%. Excluding the first-time contribution from the consolidation of Inforum, organic growth was +4.0%.

Gross profit amounted to CHF 607.4 million, up +6.1% in local currencies (+3.2% in CHF) compared to prior-year pro-forma IFRS 166. The increase above volume growth was supported by an improved product mix.

Operating profit (EBIT) recurring7 increased by +6.7% in local currencies (+3.1% in CHF) to CHF 311.5 million, compared to prior-year pro-forma IFRS 166. Currencies had a negative translation effect of CHF –10.9 million. The costs for the closure of the cocoa factory in Makassar, Indonesia, had a negative impact of CHF –8.0 million. As a result, the reported EBIT amounted to CHF 303.5 million, up +4.0% in local currencies (+0.5% in CHF) compared to prior-year pro-forma IFRS 166. The recurring EBIT per tonne was about stable at CHF 282.

Net profit for the period recurring7grew by +11.6% in local currencies (+7.1% in CHF) to CHF 211.7 million. The reported Net profit amounted to CHF 203.7 million, up +7.5% in local currencies (+3.1% in CHF) compared to prior-year pro-forma IFRS 166. The increase was supported by the lower net financing cost, while income tax expenses remained roughly flat at CHF –49.6 million, compared to CHF –47.5 million in the prior-year period.

Free cash flow for the first six months in the period under review amounted to CHF –359.2 million, compared to CHF –119.1 million in prior-year pro-forma IFRS 166. Adjusted for the effect of cocoa beans considered as readily marketable inventories (RMI), the adjusted Free cash flow was about flat and amounted to CHF –17.9 million (February 28, 2019 pro-forma IFRS 166: CHF –9.9 million).

As a leader and trusted partner in the global food supply chain, Barry Callebaut plays a critical role in contributing to the availability of food products during the COVID-19 pandemic. To do so, the Group has put in place precautionary measures to provide safe working environments for its people and maintain business continuity. Barry Callebaut has – early on – created dedicated teams at global and regional levels who are monitoring the situation as it develops and will adjust any measures based on the guidance of governments and other relevant authorities.

Barry Callebaut has to date not experienced any major disruption to its production operations. While Food Manufacturers and Global Cocoa are less affected, Gourmet sales volumes are impacted by government restrictions on the access to shops and restaurants. In China there are signals of strong demand recovery, but the overall progression of the COVID-19 pandemic remains volatile and difficult to predict.

Due to the uncertainty in the financial markets, Barry Callebaut took the precautionary decision to draw the full amount of its Revolving Credit Facility (RCF), in total EUR 1 billion with a tenor of six months, to create an alternative to the Group’s Commercial Paper Program (equivalent to around EUR 450 million) and to increase access to liquidity. Barry Callebaut has had the RCF in place for many years, as a fallback option in case the commercial paper market ceases to offer the required liquidity.

In the context of the COVID-19 pandemic, we are taking all necessary measures to protect the health of our employees and their families. We keep contributing every day to the continuity of the global food supply chain. I would like to thank all our employees, as well as our suppliers and our customers, who are as committed, engaged and passionate as ever to produce and distribute food during this challenging time.

COVID-19 is a major unforeseen event. While we have put in place precautionary measures to support the continuation of our operations, its impact on business growth and profitability cannot be quantified at this stage as it depends on the duration and severity of the pandemic. In the meantime, we remain committed to our mid-term guidance for the period ending with fiscal year 2021/22. Our global footprint, a strong innovation pipeline, diversity in customers and channels, in combination with the diligent execution of our proven ‘smart growth’ strategy, give us a sound basis to overcome the COVID-19 pandemic.

In March 2020, Barry Callebaut commenced the construction of its first chocolate factory in Southeastern Europe. The state-of-the-art facility will be located in Novi Sad, Serbia, close to the country’s capital Belgrade. The factory, with an initial annual production capacity of over 50,000 tonnes, will serve as a regional hub from which Barry Callebaut can address the rapidly growing chocolate markets of Southeastern Europe.

Also in February 2020, the Group’s Gourmet brand Mona Lisa launched ‘Mona Lisa 3D Studio’, the world’s first personalized 3D printed chocolate at scale, made from Belgian chocolate. The launch revolutionizes the world of chocolate craft by combining industry-leading production technology, bespoke design and Barry Callebaut’s chocolate expertise – allowing chefs to craft their own unique creations and reproduce them rapidly and affordably, no matter how intricate or specific the design.

In 2020, Ruby – the fourth type of chocolate – continued its success and entered the product category of ice cream with launches of ‘Magnum Ruby’ and ‘Häagen-Dazs Ruby Cacao’.

In Lokeren, Belgium, Barry Callebaut celebrated in February 2020 the groundbreaking of its new Global Distribution Center (GDC). By bundling its warehousing and distribution activities at a single site, the GDC will allow Barry Callebaut to better serve its customers, optimize efficiency and improve the cost-effectiveness of its operations. In January, as part of the Group’s ongoing efforts to optimize its cost structure and in the light of the declining Indonesian cocoa crop, Barry Callebaut closed its cocoa factory in Makassar, Indonesia. The closure led to a cost of CHF –8.0 million. The Group’s growth in Region Asia Pacific will be well supported by its other factories in the region.

Barry Callebaut is proud to have been awarded an A– score on its activities to reduce its carbon footprint in the CDP 2019 assessment. CDP, formerly the Carbon Disclosure Project, is an independent organization which assesses the carbon reduction plans of over 7,000 companies every year and scores them on a scale of A, being the pioneers, to F.

Sales volume of Barry Callebaut in Region EMEA (Europe, Middle East and Africa) increased by +5.5% to 507,177 tonnes. Excluding the first-time consolidation of Inforum as of February 2019, organic growth was +2.4%, again well above the growth of the underlying chocolate confectionery market (+0.4%)8. Food Manufacturers continued its solid growth in Western Europe and EEMEA.

Region Americas grew its sales volume by +2.2% to 287,482 tonnes. This steady growth was achieved in an overall declining chocolate confectionery market according to Nielsen (-3.0%)8. Volume growth was supported by Food Manufacturers in North America, and by Gourmet posting solid growth in South America. Sales revenue increased by +4.5% in local currencies (+3.2% in CHF) and amounted to CHF 938.0 million. Operating profit (EBIT) grew by +7.4% in local currencies(+5.0% in CHF), more than twice as fast as volume, as the result of an improved product mix and amounted to CHF 94.9 million.

Sales volume in Region Asia-Pacific continued its strong growth, despite the impact of COVID-19 in the Chinese market in the second quarter. Volume growth was double-digit in the first six months, up +16.7% to 66,754 tonnes. Due to the COVID-19 pandemic, the Nielsen data on the underlying market growth in Region Asia Pacific was incomplete9. Food Manufacturers continued its double-digit growth, mainly supported by regional accounts. Sales revenue increased by +6.0% in local currencies (+5.5% in CHF) to CHF 215.4 million. Gourmet & Specialties achieved high single-digit volume growth in the first six months of the current fiscal year. China was the first country to be impacted by the COVID-19 pandemic and this led to a sharp slowdown in Gourmet in February 2020, particularly in the high-end segment. This impacted Operating profit (EBIT), which grew by +4.4% in local currencies (+3.0% in CHF), less than the volume growth, and amounted to CHF 27.7 million.

In line with expectations, Global Cocoa showed normalized volume growth in the second quarter, resulting in an increase of +6.5% to 242,315 tonnes in the first six months of the fiscal year. Sales revenue increased by +5.5% in local currencies (+0.5% in CHF) to CHF 1,023.5 million. Operating profit (EBIT) recurring10 amounted to CHF 55.3 million, compared to CHF 54.6 million in the prior-year period, reflecting the more challenging environment.

During the first six months of the current fiscal year cocoa bean prices fluctuated between GBP 1,734 and GBP 2,045 per tonne and closed at GBP 1,955 per tonne on February 29, 2020. On average, cocoa bean prices increased by +13.6% versus the prior-year period. Global bean supply and demand remained balanced. Côte d’Ivoire and Ghana announced in July 2019 a living income differential (LID) of USD 400 per tonne of cocoa beans, effective as of the 2020/21 crop. 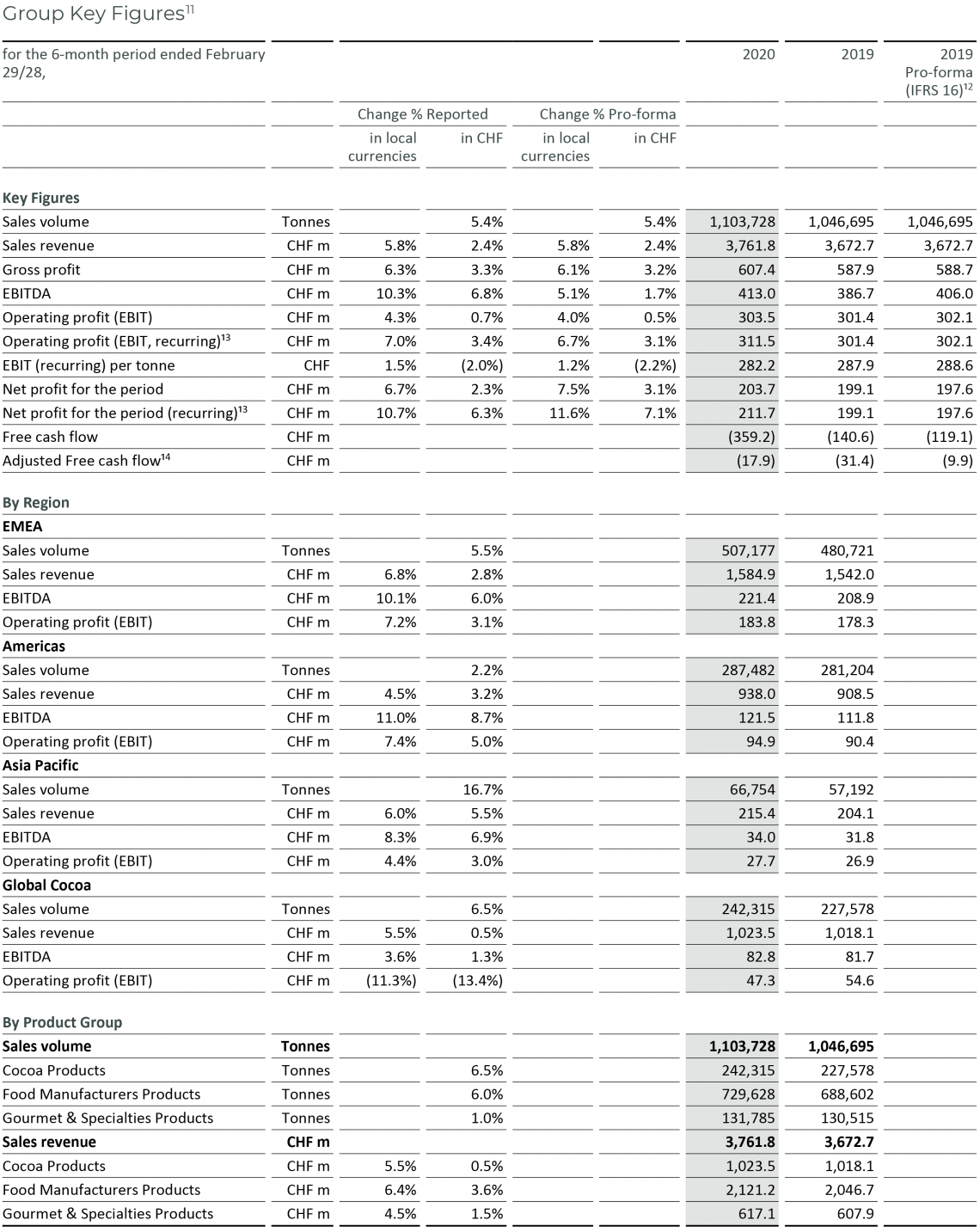 11 Financial performance measures, not defined by IFRS, are defined in the Annual Report 2018/19 on page 181.
12 Prior-year comparatives have been calculated on a pro-forma basis to reflect the estimated impact of IFRS 16 had it been adopted at the time (for the current year impact see Half-Year Report, pages 17–21).
13 Operating profit (EBIT) recurring and Net profit recurring exclude the cost of CHF –8.0 million for the closure of the Makassar (Indonesia) cocoa factory
14 Free cash flow adjusted for the cash flow impact of cocoa bean inventories regarded by the Group as readily marketable inventories (RMI).