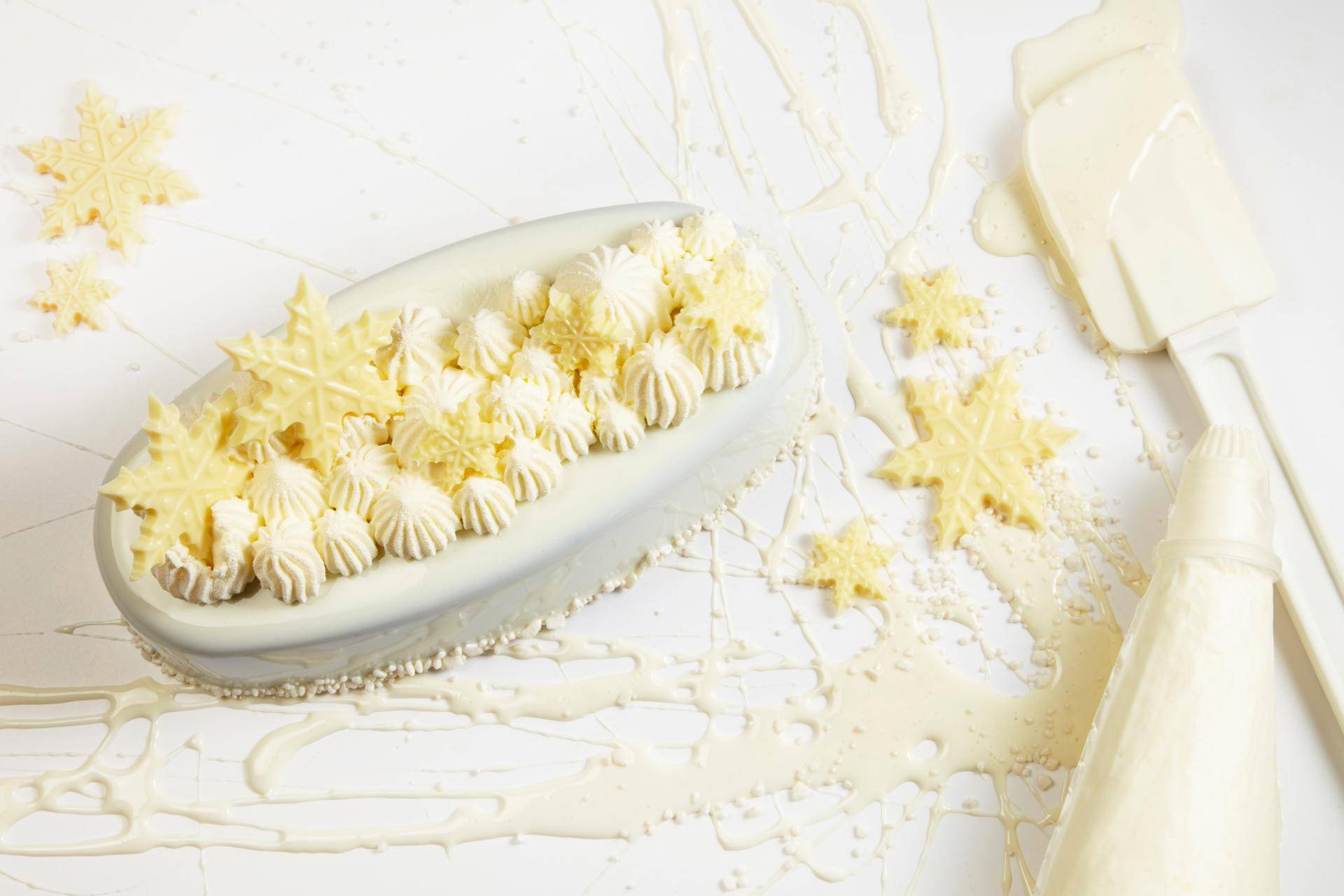 In the first quarter of the fiscal year, we are pleased to report resilient results in a still challenging environment. The overall improving chocolate performance and the continued recovery in Gourmet show that we keep building momentum quarter to quarter.

The Barry Callebaut Group, the world’s leading manufacturer of high-quality chocolate and cocoa products, reported – against a high prior-year comparison base – resilient sales volume of 560,354 tonnes, which corresponds to a decline of –4.3% during the first three months of fiscal year 2020/21 (ended November 30, 2020). Sales volume in the chocolate business continued to improve, with a slight decline of –1.8% to 447,704 tonnes, in line with the underlying global chocolate confectionery market2. The key growth drivers Outsourcing (+2.6%) and Emerging Markets (+4.7%, excluding Cocoa) contributed positively and Gourmet & Specialties continued to recover (–5.5%). Sales volume in Global Cocoa declined by –13.1% to 112,650 tonnes as a result of the continued focus on ‘smart growth’. Sales revenue in the first three months amounted to CHF 1,777.5 million, a decline of –3.5% in local currencies (–11.2% in CHF).

In still volatile markets, we continue to find new ways of doing business and seize opportunities while maintaining strict cost discipline. We see a gradual recovery, supported by our consistent focus on ‘smart growth’, our broad customer footprint and our strong innovation pipeline. This makes us confident that we can deliver on our mid-term guidance.

1 On average for the 3-year period 2020/21 to 2022/23: 5-7% volume growth and EBIT above volume growth in local currencies, barring any major unforeseeable events and based on the assumption of a gradual recovery from COVID-19 without major lockdown resurgence.

2 Source: Nielsen, volume growth of –1.2% excluding e-commerce – 25 countries, September to November 2020, data subject to adjustment to match Barry Callebaut’s reporting period. Nielsen data only partially reflects the out-of-home and impulse consumption, which was heavily impacted by the lockdowns due to COVID-19.

Expansion: The Group deepened its presence in China in November 2020 with the inauguration of a CHOCOLATE ACADEMY™ Center in Shenzhen, the third in China and the 23rd globally. Through inspiration, education and personalized support, the CHOCOLATE ACADEMY™ Center in Shenzhen will strengthen the collaboration with artisans, pastry chefs, confectioners, bakers and caterers in South China.
In November 2020, La Morella Nuts opened a Global Center of Expertise for nuts in Reus, Spain. The Center aims to grow expertise in taste and texture, sourcing and sustainability, as well as application knowledge. Furthermore, La Morella Nuts announced further expansion in Europe, Asia Pacific as well as North America and introduced a specialty nut range for plant-based beverages, snacks and frozen treats targeting brands and artisans. Through this range, La Morella Nuts is tapping into the growing consumer demand for healthier indulgence and plant based products.

Sustainability: Barry Callebaut published in December 2020 its fourth Forever Chocolate progress report, detailing its achievements in making sustainable chocolate the norm by 2025. The Group achieved an –8.1% reduction in carbon emissions in fiscal year 2019/20, reducing its global carbon footprint (scope 1, 2 and 3) to 7.8 million tonnes CO2e (carbon dioxide equivalents). Barry Callebaut trained almost 100,000 cocoa farmers on child labor awareness and increased the number of farmers mapped with geographic and socio-economic data to over 180,000. It also distributed more than 2.0 million cocoa seedlings and 1.6 million shade trees.
In November 2020, corporate and public leaders joined Barry Callebaut to sign the coconut industry’s first Sustainable Coconut Charter. The charter aims to improve farmer livelihoods, lessen the carbon footprint of coconut production and boost supply to meet rising global demand for coconut products.
Furthermore, in November 2020, Barry Callebaut announced an industry first project that will convert cocoa by-products into biochar at one of its European factories. Biochar is similar to charcoal and can be used to produce energy, reduce waste and permanently store carbon. Using cocoa shells to produce biochar will help Barry Callebaut to achieve its Forever Chocolate target of becoming carbon positive by 2025.
In December 2020, for the second year in a row, Barry Callebaut was awarded an A- by the Carbon Disclosure Project (CDP) for its 2019 efforts to reduce its carbon footprint.

Sales volume of Barry Callebaut in Region EMEA (Europe, Middle East and Africa) decreased by
–6.7% to 251,554 tonnes. The volume development was resilient in light of the renewed lockdowns in major European markets3 at the end of the first quarter of the fiscal year. Food Manufacturers was impacted by lower seasonal activities, leading to a mid-single digit decline. Gourmet & Specialties’ volume continued to recover, in particular in Eastern Europe, resulting in an overall volume decline in the low teens. Sales revenue decreased by –4.6% in local currencies (–8.3% in CHF) to CHF 775.1 million. In preparation for the departure of the United Kingdom from the European Union, the Group took all the necessary steps to ensure continued high service levels for its customers in the UK.

The positive momentum continued in Region Americas with sales volume increasing by +6.0% to 162,070 tonnes, well ahead of the declining regional chocolate confectionery market3. Volume growth was supported by both Food Manufacturers and Gourmet. In particular in North America, large corporate accounts in Food Manufacturers grew by double-digits. Gourmet & Specialties’ overall volume growth returned to positive territory. Sales revenue increased by +5.2% in local currencies (–5.6% in CHF) to CHF 471.5 million.

Against a high double-digit comparison base in prior year, Region Asia Pacific achieved steady growth with volume up +1.8% to 34,080 tonnes, significantly outpacing the regional chocolate confectionery market4. Growth in Food Manufacturers was mainly supported by corporate accounts. The integration of GKC Foods in Australia is on track and will strengthen the Group’s position in the industrial chocolate market and leverage its value-adding Gourmet & Specialties business in Australia and New Zealand. The opening of a CHOCOLATE ACADEMY™ Center in Shenzhen, China, will create further opportunities for Gourmet in the Region. Sales revenue increased by +1.4% in local currencies (–4.8% in CHF) to CHF 106.9 million.

Global Cocoa sales volume declined by –13.1% to 112,650 tonnes, against a high comparison base. Furthermore, the decline reflects the Group’s focus on ‘smart growth’, proactively balancing volume and profit and driving for a disciplined implementation of the ‘Living Income Differential’ (LID). The LID has been consistently applied to the Group’s bean purchases in Côte d’Ivoire and Ghana. Sales revenue decreased by –10.9% in local currencies (–22.0% in CHF) to CHF 424.0 million, partially due to lower cocoa bean prices.

During the first three months of fiscal year 2020/21, terminal market5 prices for cocoa beans fluctuated between GBP 1,608 and GBP 1,869 per tonne and closed at GBP 1,869 per tonne on November 30, 2020. On average, cocoa bean prices decreased by –7.2% versus the prior-year quarter. The outlook for global bean supply and demand indicates a sizable surplus.
World sugar prices increased on average by +14.3% on the back of increased demand from China and in the absence of Indian exports. Sugar prices in Europe decreased on average by –3.9% compared to the prior-year first quarter.
Dairy prices decreased on average by –8.7% compared to the same prior-year quarter on the back of improved milk supply. The dairy market is still recovering from the sharp price decline caused by COVID-19 lockdowns in the third quarter 2019/20.

3 Source: Nielsen. The volume growth for the period September to November 2020 was: EMEA +0.4%, Americas –1.0%. Data is subject to adjustment to match Barry Callebaut’s reporting period. The underlying chocolate confectionery market growth according to Nielsen does not include e-commerce and only partially reflects the out-of-home and impulse consumption.

4 Source: Nielsen. The volume growth in Asia Pacific was –12.2% for the period September to November 2020. Data is subject to adjustment to match Barry Callebaut’s reporting period. The underlying chocolate confectionery market growth according to Nielsen does not include e-commerce and only partially reflects the out-of-home and impulse consumption. 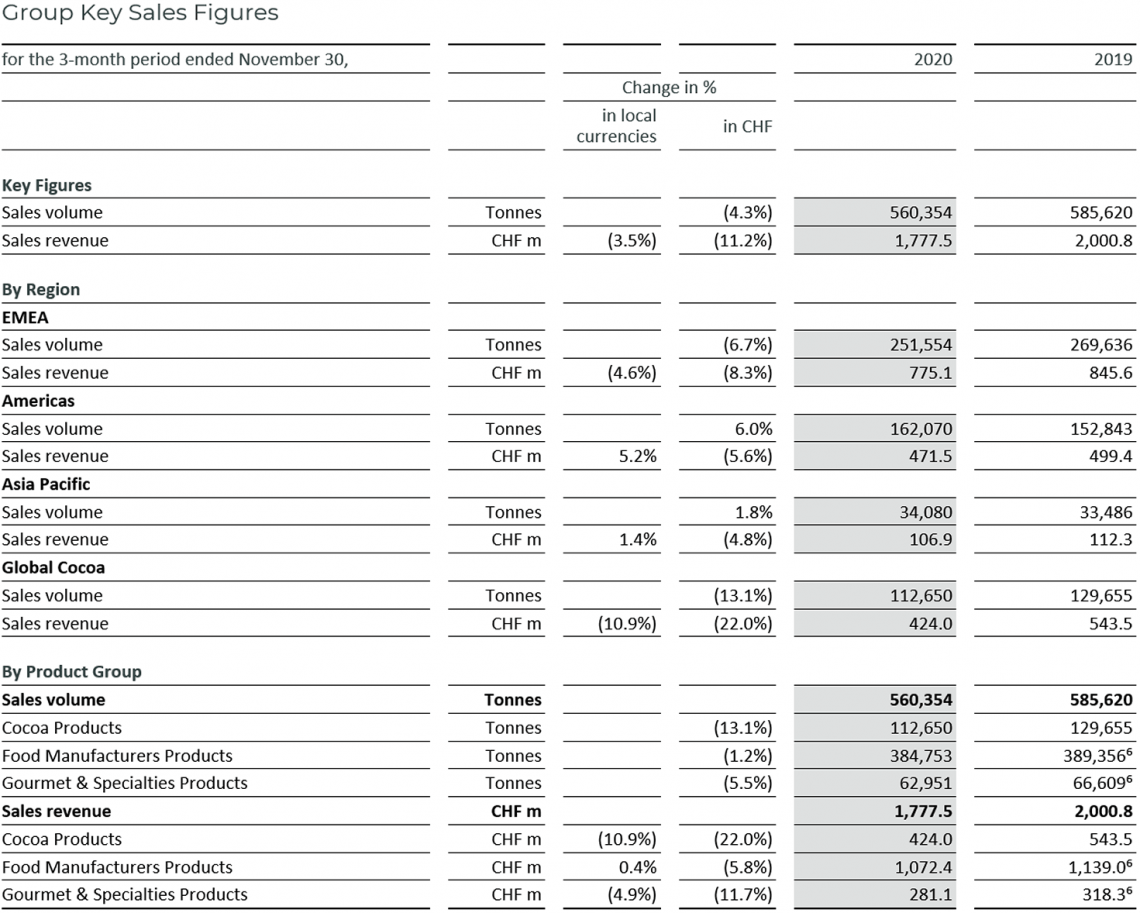 6 Certain Gourmet & Specialties customers have been shifted to the Food Manufacturers product group to better serve them. The minor reallocation represented less than 1% of Gourmet & Specialties volume and sales revenues in fiscal year 2019/20. Please refer to Appendix below for full details. 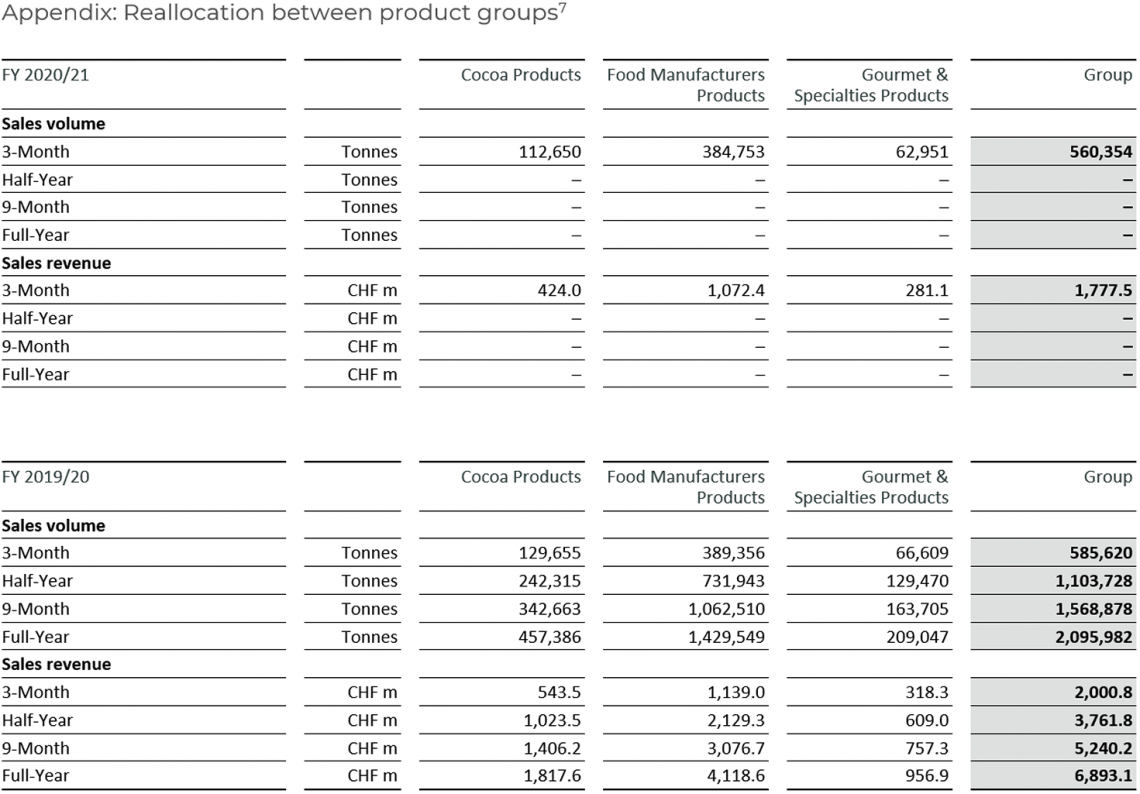