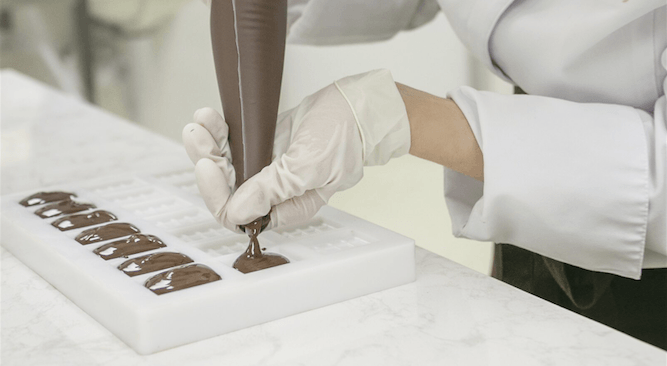 Barry Callebaut, the world’s leading manufacturer of high-quality cocoa and chocolate, today announced that award-winning French pasty chef Jerome Landrieu will join the company’s newest Chocolate Academy – the first in the United States – which will open in Chicago next month.

Landrieu will serve as technical advisor at the Chocolate Academy, where he will share his experience in the art of chocolate and teach diverse chocolate applications and processing techniques to artisans and culinary professionals, including pastry chefs, confectioners, bakers and caterers.

“Chef Landrieu is one of the most well-respected culinary professionals in France, and will bring a fresh perspective on pastry arts to our North American technical advisor team,” said Massimo Garavaglia, president of Barry Callebaut North America’s Food Manufacturer and Gourmet business units. “As an ambassador of our Callebaut, Cacao Barry and Carma gourmet chocolate brands, he will play an essential role in educating gourmet artisans from throughout the United States about the fine art of creating culinary masterpieces with chocolate.”

Prior to joining Barry Callebaut, Landrieu worked at several leading pastry shops and restaurants in France and studied under three chefs who earned the prestigious Meilleur Ouvrier de France (M.O.F.) title – the highest honor in France for gourmet artisans. His passion for his craft eventually led him to a teaching position at the Superior National School of Confectionery and Pastry in Yssingeaux, France. And just prior to moving to Chicago, Landrieu completed his fourth year at the Bellouet Conseils School – a prestigious Parisian school for the art of desserts.

Landrieu has won numerous awards for his culinary skills, including two first place awards in sugar artistry and a second place award for artistry at the Chocolat by Pascal Caffet competition in 2006.  He also won first place for tasting selection at the Salon du Chocolat in Paris, and finished in the pastry semifinals at the 2007 Meilleur Ouvrier de France competition.

“My philosophy when it comes to creating truly decadent desserts has always been to use the best products and techniques, which is why I believe working with Barry Callebaut’s gourmet chocolates is a perfect fit,” said Landrieu. “Whether I’m creating a chocolate sculpture or a delicate truffle, I strive to create pastry that is unpretentious, elegant, and enticing.”

A state-of-the-art training facility for chocolatiers, confectioners and chefs

In his new role, Landrieu will help lead the technical direction of the Chocolate Academy in Chicago, which will offer a diverse range of seminars, demonstrations, theoretical courses and practical workshops designed to inspire artisans and culinary professionals, including pastry chefs, confectioners, bakers and caterers, from around the globe to:

With annual sales of more than CHF 4 billion for fiscal year 2006/07, Zurich-based Barry Callebaut is the world’s leading manufacturer of high-quality cocoa and chocolate – from the cocoa bean to the finished product on the store shelf.  Barry Callebaut is present in 24 countries, operates about 40 production facilities and employs approximately 7,500 people.  The company serves the entire food industry, from food manufacturers to professional users of chocolate to global retailers. The company’s Callebaut, Cacao Barry and Carma products are specifically designed to meet the special needs of artisan customers, including bakers, pastry chefs, hotels, restaurants and caterers.  Barry Callebaut also provides a comprehensive range of services in the fields of product development, processing, training and marketing.