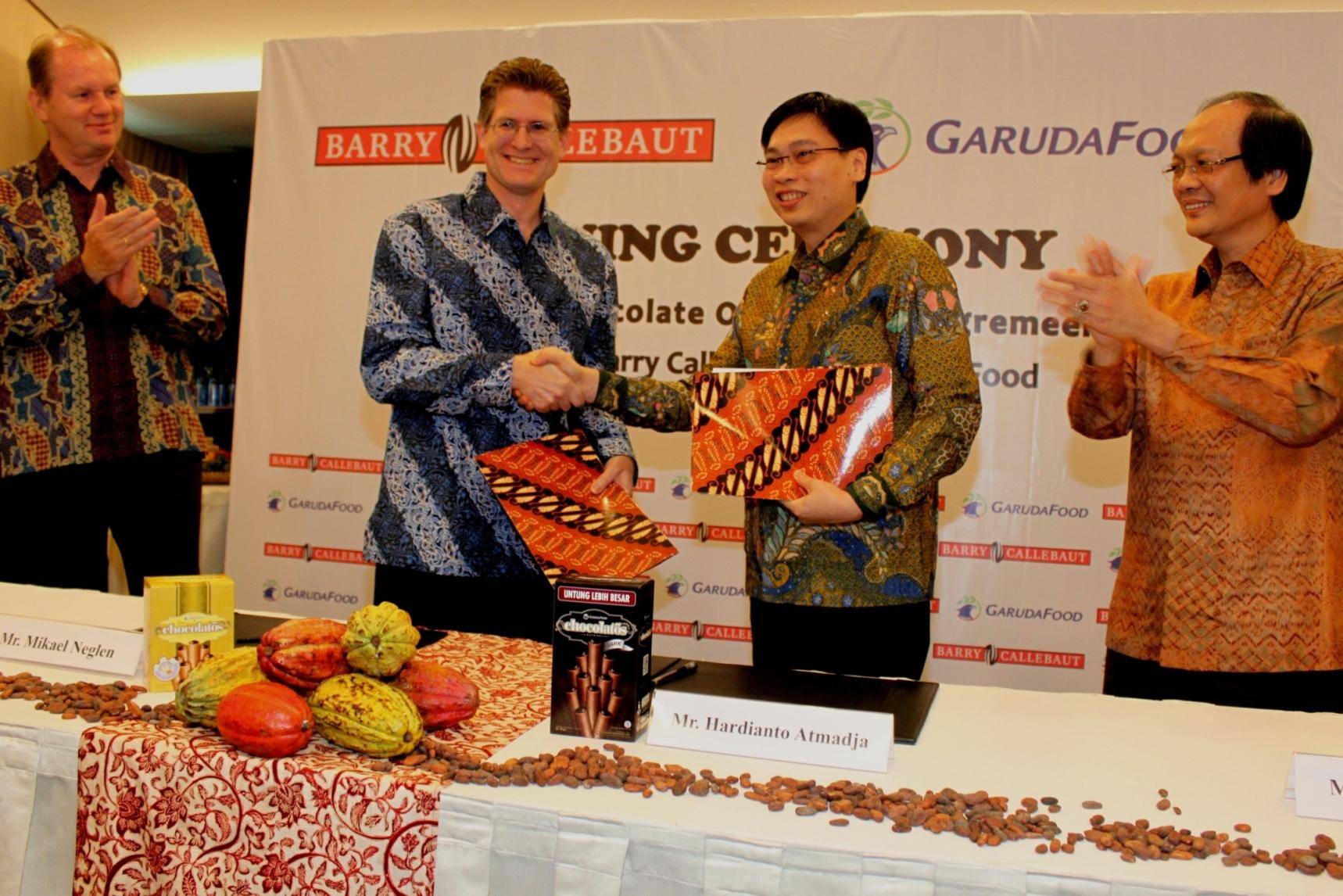 GarudaFood Group, one of the largest food and beverage companies in Indonesia, and the Barry Callebaut Group, the world’s leading manufacturer of high-quality chocolate and cocoa products, announced today the signing of a long-term supply agreement.

Under the terms of the agreement, Barry Callebaut will supply 10,000 tonnes of compound chocolate per year to GarudaFood’s biscuit factory in Gresik (Province of East Java). Barry Callebaut plans to increase the capacity significantly over the next three years. The implementation of this agreement will start in mid-2016. Barry Callebaut will take over some of the manufacturing equipment from GarudaFood and set up its operations in a new factory building on the premises of the GarudaFood biscuit plant in Gresik. The agreement also includes the close cooperation between Barry Callebaut and GarudaFood in innovation. Through joint R&D activities the two companies will develop new products that will support GarudaFood’s further growth in the Indonesian market. The parties agreed not to disclose any further terms of the agreement.

Hardianto Atmadja, CEO of GarudaFood, commented: “I am truly excited about this partnership. I believe it will provide and delight our consumers with the best chocolate and products that meet global quality standards.”

Juergen Steinemann, CEO of the Barry Callebaut Group, added: “It is an honor for us that we were able to win GarudaFood as our first long-term outsourcing partner in Southeast Asia. This partnership marks our entry with chocolate and compound production in Indonesia, the world’s fourth largest country with a population of 250 million and impressive growth rates. Partnering with the GarudaFood Group not only allows us to team up with a leader in one of the most vibrant economies in Asia Pacific but also to gain a strategic foothold in an emerging market that offers further significant growth potential.”

About GarudaFood (www.garudafood.com):
GarudaFood, founded in 1990, belongs to the Tudung Group, an investment holding company in Indonesia. GarudaFood is manufacturing and marketing snacks, biscuits, confectionery products, dairy and beverages (through a JV with Suntory) and employs about 18,000 people. It also owns and operates an extensive distribution network throughout Indonesia covering 21 regions, 153 depots, 154 distribution partners and 360,000 outlets. GarudaFood has become one of the leading domestic biscuit companies in Indonesia and is the recipient of multiple top national brand awards such as: Garuda Peanut, Chocolatos, Gery Saluut, Okky Jelly Drink, Super 02 & Leo snack. Garuda Food operates 14 plants across Indonesia and India.

About Barry Callebaut Group:
With annual sales of about CHF 5.9 billion (EUR 4.8 billion / USD 6.5 billion) in fiscal year 2013/14, the Zurich-based Barry Callebaut Group is the world’s leading manufacturer of high-quality chocolate and cocoa products – from the origination and processing cocoa beans to producing the finest chocolates, including chocolate fillings, decorations and compounds. The Group runs more than 50 production facilities worldwide and employs a diverse and dedicated global workforce of over 9,300 people.
The Barry Callebaut Group serves the entire food industry, from industrial food manufacturers to artisanal and professional users of chocolate, such as chocolatiers, pastry chefs, bakers, hotels, restaurants or caterers. The two global brands catering to the specific needs of these Gourmet customers are Callebaut® and Cacao Barry®.
The Barry Callebaut Group is committed to sustainable cocoa production through its “Cocoa Horizons” initiative to help ensure future supplies of cocoa as well as improve farmer livelihoods.