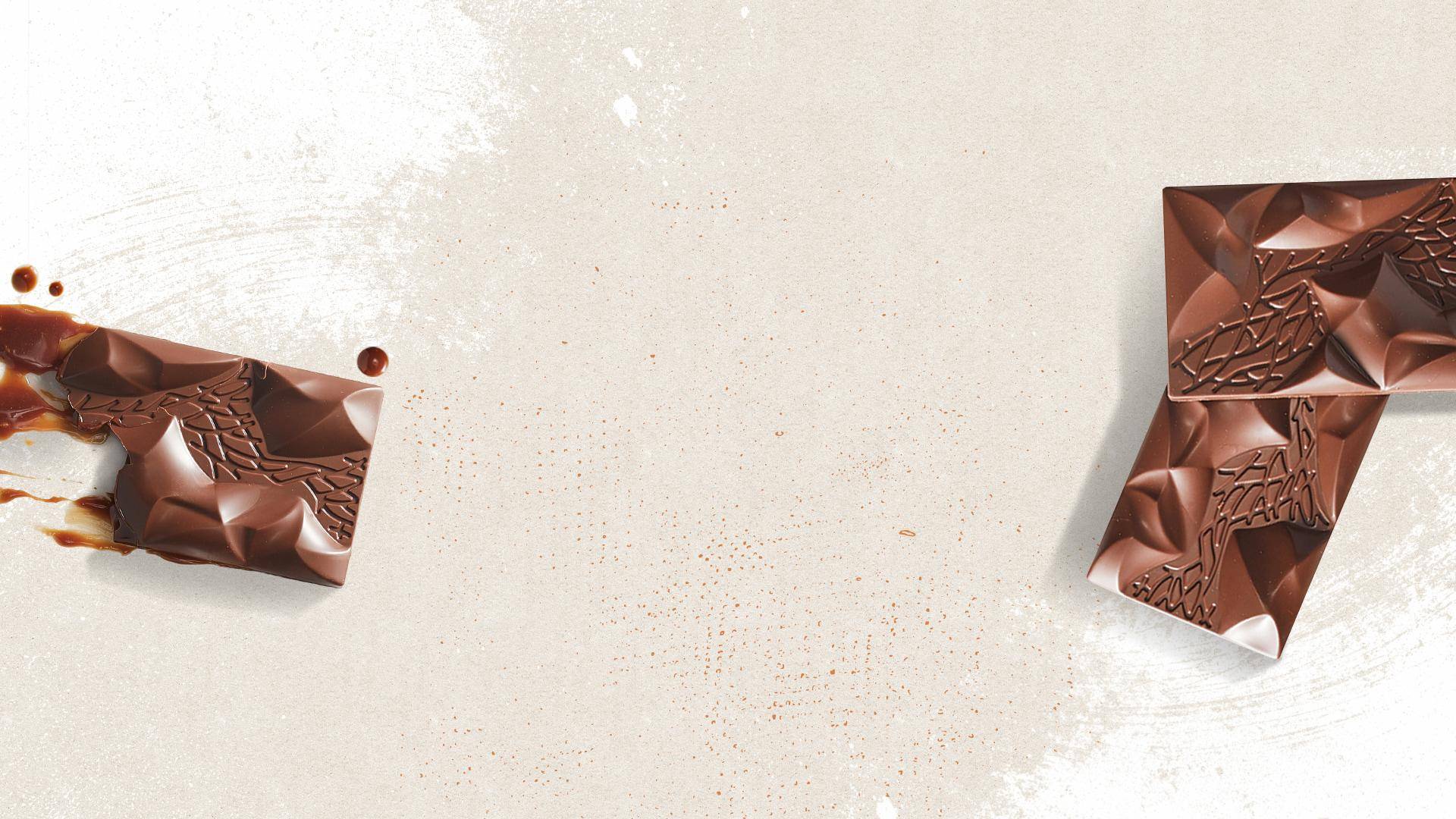 We are presenting a strong set of results, delivering profitable volume growth throughout the year, supported by all Regions and segments, particularly Gourmet & Specialties. Our broad geographic footprint and customer base, together with our sharpened business model and strong balance sheet, continued to build a solid foundation for growth.

1 Please refer to appendix on page 9 for the detailed recurring results reconciliation.
2  Free cash flow adjusted for the cash flow impact of cocoa bean inventories regarded by the Group as RMI.
3 On average for the 3-year period 2020/21 - 2022/23: 5-7% volume growth and EBIT above volume growth in local currencies, barring any major unforeseeable events.

Sales revenue amounted to CHF 8,091.9 million, up +14.6% in local currencies (+12.3% in CHF). The increase was impacted by the overall inflationary environment, which Barry Callebaut managed through its cost-plus pricing model for the majority of its business.

Gross profit grew faster than sales volume and amounted to CHF 1,217.2 million, up +8.4% in local currencies (+6.1% in CHF). Despite the lost volume due to the temporary stoppage of the Wieze factory, the contribution of volume to Gross profit was very healthy. In particular the growth in Gourmet & Specialties and the Group's solid cost-plus model contributed to the positive mix. As anticipated, profitability in the Cocoa business improved and led to a positive contribution for the financial year 2021/22.

Operating profit (EBIT) recurring5 amounted to CHF 624.7 million, up +13.5% in local currencies (+10.2% in CHF), well ahead of volume growth. EBIT recurring per tonne improved to CHF 271 from CHF 259 in prior year. EBIT reported amounted to CHF 553.5 million, +0.1% in local currencies (-2.3% in CHF), and included a positive impact of CHF 13.5 million from the recovery of indirect tax credits for prior fiscal periods in Brazil, as well as the net one-off impact of CHF -76.9 million related to the salmonella incident at the Wieze factory in Belgium, and a negative impact of CHF -7.8 million for the closure of the chocolate factory in Moreton, UK.

Net working capital increased to CHF 1,293.1 million, compared to CHF 1,241.8 million in prior year. The increase was less than the Group's volume growth. Receivables increased on the back of business growth. While good inventory management largely mitigated the impact of general raw material price inflation, the temporary stoppage in Wieze led to some increase. Both developments were largely offset by higher payables.

Supported by the consistency of our growth strategy and the strength of our innovation pipeline, we are on track to achieve our mid-term guidance in Fiscal Year 2022/23. Our Wieze factory runs again at normal capacity, though we will still experience an impact in the first quarter 2022/23 as we are catching up on delayed volume. I want to thank all the colleagues involved for their relentless work in the cleaning of the factory and all our customers for their loyalty and cooperation.

Expansion: In October 2022, Barry Callebaut signed a partnership with Attelli in Morocco which will accelerate the expansion of Barry Callebaut in the region. Under the terms of the agreement, Barry Callebaut acquired Attelli's manufacturing assets in Casablanca, establishing the Group’s first  chocolate production footprint in Morocco and consequently on the African continent.
In September 2022, the Group deepened its presence in Canada by celebrating the groundbreaking of a new factory in Brantford, Ontario. Upon completion, the site will specialize in sugar-free, high protein, and other specialty chocolate products, further boosting the long-term growth of Barry Callebaut in North America.
In August 2022, Barry Callebaut celebrated the Group's 15-years presence in China, an important chocolate gourmet market, by opening its centrally-located Greater China headquarters as well as China’s flagship CHOCOLATE ACADEMY™ Center in Shanghai. Through its global network of now 26 CHOCOLATE ACADEMY™ Centers, Barry Callebaut offers inspiration, training and personalized support for artisans, pastry chefs, confectioners, bakers and caterers.

Innovation: In October 2022, Barry Callebaut introduced a breakthrough innovation, redesigning how chocolate is made. Thanks to advances to the process of farming, fermentation and roasting of the cocoa beans, chocolate lovers can indulge in the purity of cocoa flavors, as the recipe for the new chocolate is as short as it can be. Dark chocolate is made from only cocoa and sugar, whereas Milk chocolate contains dairy as well. By introducing this innovation, Barry Callebaut is supporting brands and artisans to launch innovative and exciting chocolate creations in confectionery, bakery, pastry, desserts and ice-cream.

In September 2022, Barry Callebaut officially opened its Pilot Plant & Chocolate LAB with integrated bakery in Banbury, UK. This state-of-the-art R&D facility, together with the local CHOCOLATE ACADEMY™ Center, will strengthen the collaboration with customers in the UK and Ireland, helping them to lead the way by bringing inspiring chocolate experiences to life from concept to creation.
In early 2022, Barry Callebaut launched in the US and Canada new plant-based innovations including dairy-free compound and dairy-free organic chocolate. The new ranges include new solutions for the baking, confectionery, snacking and ice cream segments and are catering to the growing demand for plant-based and dairy-free consumer products.

Sustainability: In September 2022, Sustainalytics ranked Barry Callebaut as #1 out of 584 companies in the ‘Food Products’ category. Sustainalytics is a leading player in assessing industry efforts to manage Environmental, Social and Governance (ESG) risks in supply chains. This is the fourth consecutive year that Barry Callebaut has been recognized as a leader in the management of ESG risks in its supply chain, not only in the cocoa and chocolate sector, but also in the broader food and beverage industry.

In recent months, Barry Callebaut collaborated with Conseil Café Cacao (CCC) in Côte d’Ivoire on a traceability trial project in the region of Aboisso, that includes the merging of Barry Callebaut's data with government-owned farmer data. The aim of the trial project is to feed the learnings into a consolidated national farm database, currently being built by the CCC.

In Region EMEA (Europe, Middle East and Africa) the salmonella incident at the Wieze factory in Belgium and the resulting temporary production stoppage, followed by a gradual ramp-up towards the end of the fiscal year, had a notable impact on volume and profit. Supported by the strong growth in the first nine months of the fiscal year, volume in the Region increased by +4.3% to 1,040,018 tonnes for the full fiscal year 2021/22. As of October 2022, the cleaning of the Wieze factory neared completion and the factory is again operating at normal capacity. Excluding the first-time consolidation of Europe Chocolate Company (ECC) since September 2021, organic volume growth was +3.0%, well ahead of the declining regional chocolate confectionery market (-1.3%). Food Manufacturers, particularly in Western Europe, was impacted by a significant volume drop in the fourth quarter, due to the incident in the Wieze factory, affecting its healthy volume growth thus far. The Gourmet & Specialties business was not immediately impacted by the incident and continued its strong growth trajectory across the Region. Sales revenue amounted to CHF 3,341.0 million, up +13.9% in local currencies (+6.8% in CHF). Operating profit (EBIT) reported amounted to CHF 267.2 million, down -15.6% in local currencies (-21.2% in CHF). Excluding the non-recurring impact linked to the incident at the Wieze factory and the cost for the closure of the chocolate factory in Moreton, UK, EBIT recurring amounted to CHF 351.9 million, up +10.5% in local currencies (+3.7% in CHF) reflecting the positive mix and effective cost control.

In Region Asia Pacific strong volume growth continued at +15.8% and reached 160,304 tonnes in fiscal year 2021/22, clearly outpacing the underlying chocolate confectionery market (+11.0%). Strong growth with Food Manufacturers continued in key markets such as India and China, though some markets, including Australia, still experienced ripple effects from COVID-19. Despite the challenging comparison base, the Gourmet & Specialties business continued its strong growth. Sales revenue increased by +23.3% in local currencies (+23.4% in CHF) to CHF 547.8 million, mainly reflecting the inflationary environment. Operating profit (EBIT) amounted to CHF 59.1 million, up +2.9% in local currencies (+3.8% in CHF). EBIT growth lagged volume growth mainly due to upfront investments in growth, particularly in Australia. Nevertheless, the Region's profitability per tonne remained well ahead of the Group average.

During fiscal year 2021/22, the cocoa bean price10 fluctuated between GBP 1,636 and GBP 1,882 per tonne and closed at GBP 1,878 per tonne on August 31, 2022. On average, the cocoa bean price increased by +4.2% versus prior year. While the global bean supply and demand expectations for 2021/22 indicate a deficit, large stocks carried from prior-year surpluses allow for sufficient bean supply, which should lead to an overall more balanced situation. The average combined ratio slightly increased to 3.6x, compared to 3.5x in prior year. This was the result of a rising cocoa powder price, while cocoa butter price suffered from the ripple-effects of the COVID-19 pandemic. Towards the end of the fiscal year 2021/22, cocoa butter price started to increase thanks to strong chocolate consumption in Europe and the US.
The world market price for sugar increased on average by +18.7%. This was due to a substantially lower Brazilian crop and a macro-environment impacted by high energy prices and geopolitical uncertainties. Sugar price in Europe increased on average by +56.4% during the fiscal year 2021/22. Robust demand was confronted with low supply due to reduced acreage and dry weather. The  additionally surging energy costs contributed to the strong price increase.
The dairy price increased on average by +51.5% during the fiscal year 2021/22. Increasing demand coupled with a substantial decline in milk supply, driven by drought in the northern hemisphere and input inflation due to the war in Ukraine, pushed dairy product prices to historical highs.

The Board of Directors is proposing to shareholders at the Annual General Meeting of Shareholders (AGM) on December 14, 2022, a stable payout of CHF 28.00 per share. This corresponds to a payout ratio of 43% of the reported net profit, for once above the targeted ratio of 35-40% due to the above-mentioned one-off impact on net profit. The dividend will be paid to shareholders on, or around, January 11, 2023, subject to approval by the Annual General Meeting of Shareholders.

All members of the Board will stand for reelection for another term of office of one year. The Board of Directors proposes to elect Thomas Intrator (Swiss national) as a new member of the Board. Thomas Intrator led a distinguished career in international shipping, trading, energy and risk management at Cargill, culminating in his last role as President and CEO of Cargill SA. His expertise in energy, logistics, trading and risk management will make a significant contribution to expand the Board expertise in these important areas.

The Annual General Meeting (AGM) of Shareholders 2021/22, scheduled for December 14, 2022, will this year again take place with personal attendance of shareholders. Details can be found on the Group website and in the invitation to the AGM which will be sent by mid-November 2022.

Further information is available in the following publications: 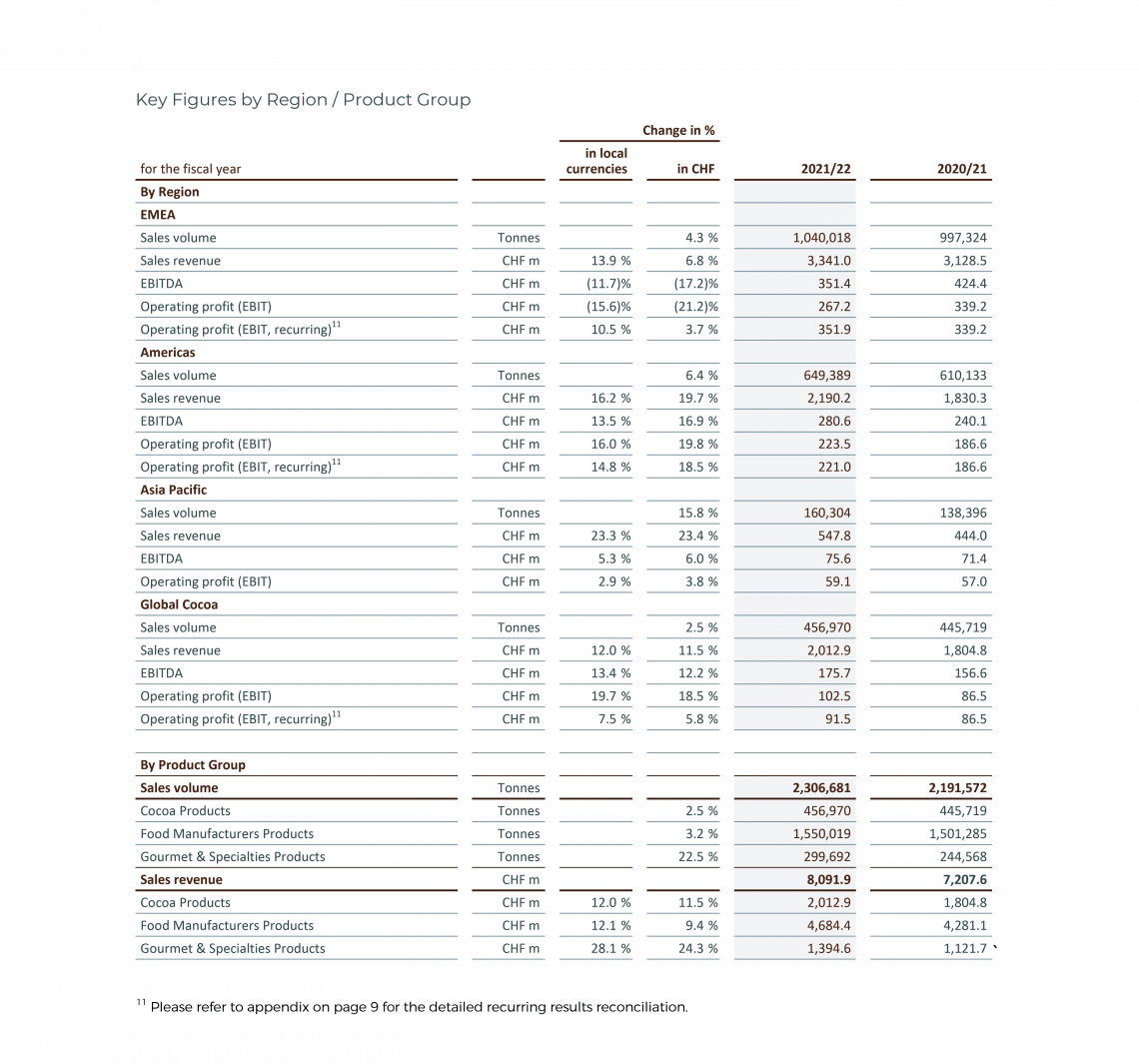 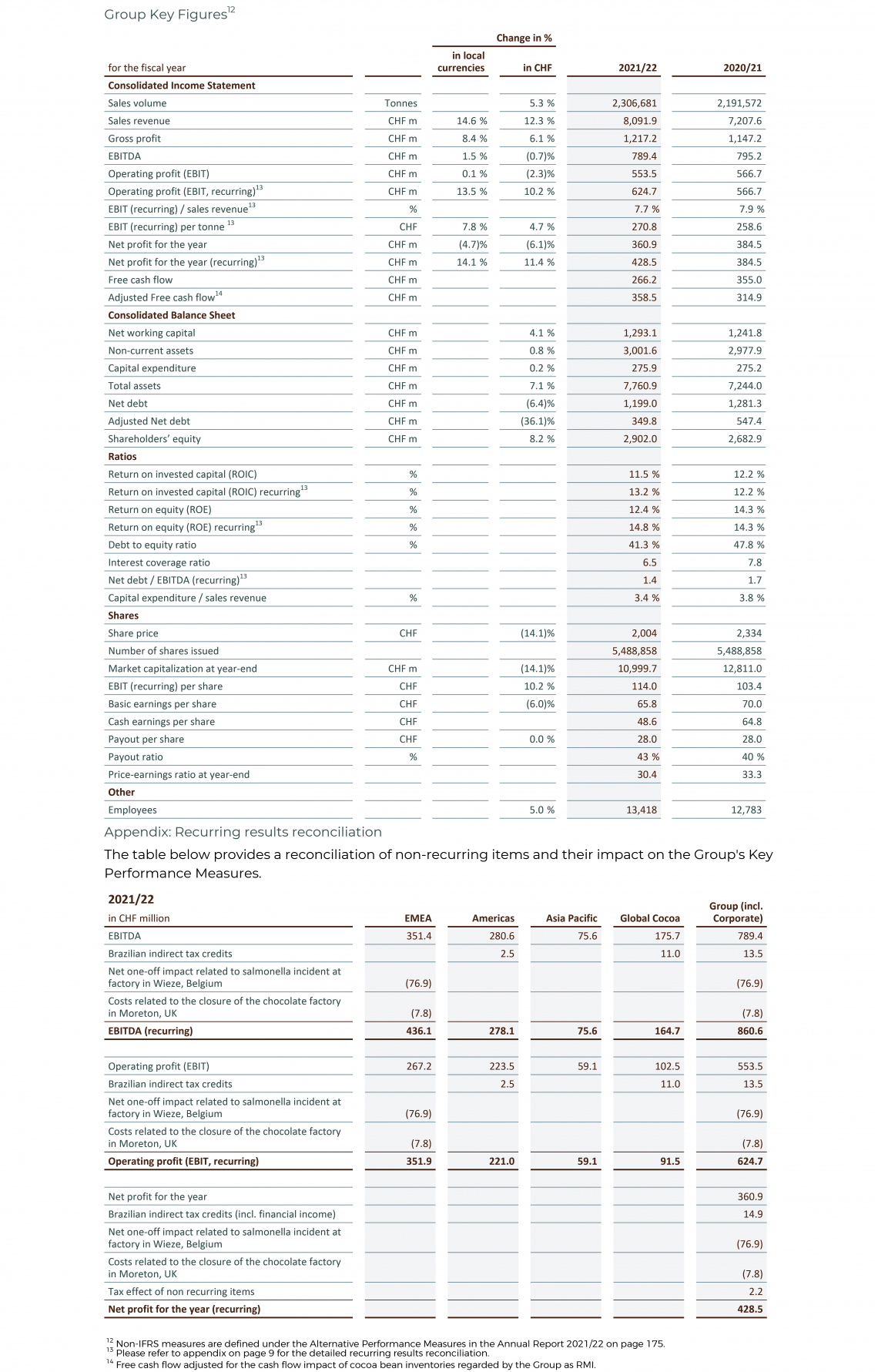