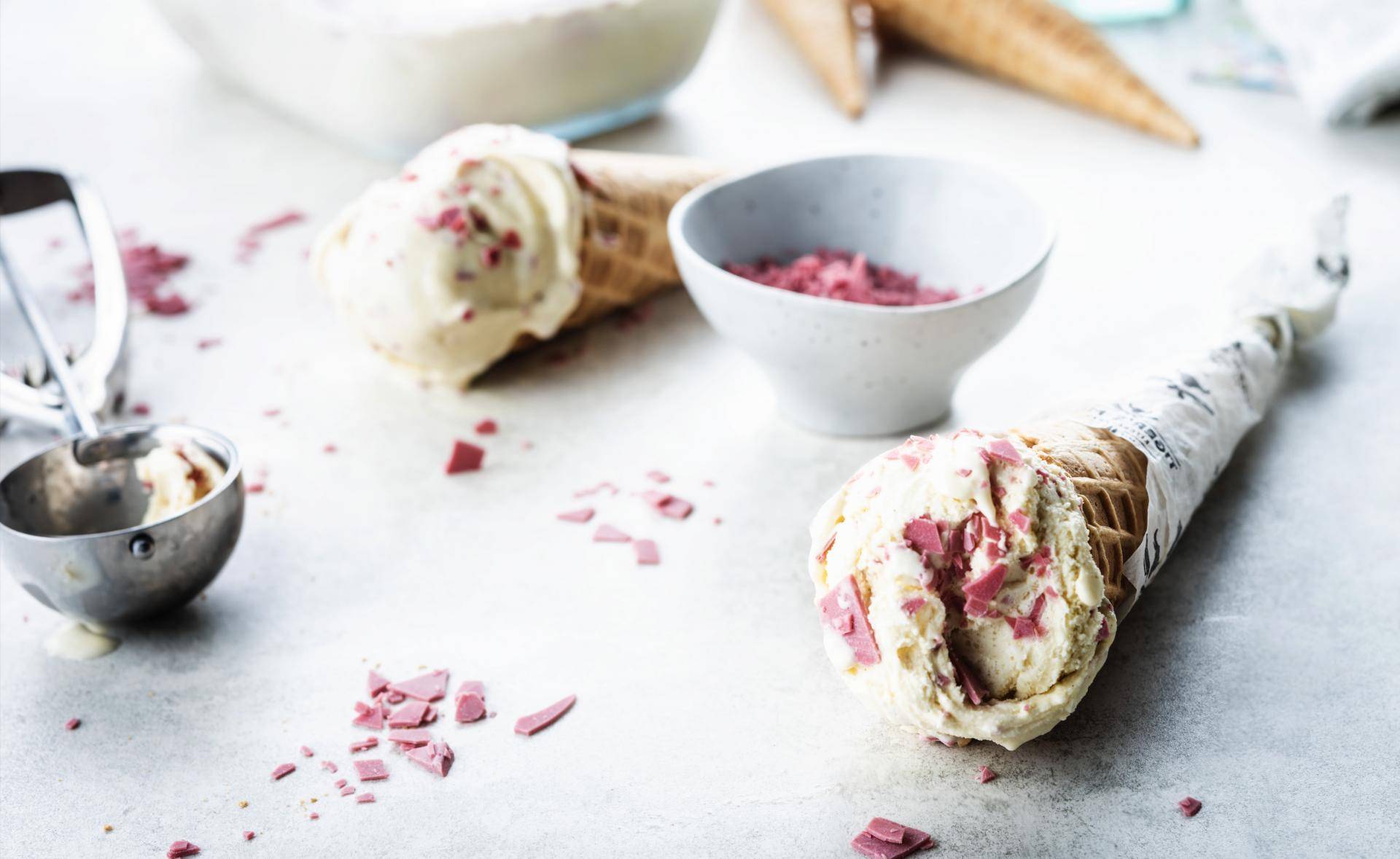 Thanks to our great team, we are delivering continued strong volume growth across all Regions. These excellent results were achieved on the back of a strong chocolate performance, with another outstanding performance by Gourmet, in the third quarter against a high comparison base.

The Barry Callebaut Group, the world’s leading manufacturer of high-quality chocolate and cocoa products, reported continued strong sales volume growth of +7.9% to 1,751,422 tonnes during the first nine months of fiscal year 2021/22 (ended May 31, 2022). Organic volume growth, excluding the first-time consolidation of Europe Chocolate Company (ECC) as of September 2021, amounted to +7.1% in the first nine months. The chocolate business continued its strong momentum in the third quarter (+7.5%), against a high comparison base. The chocolate volume growth of +9.1% over the first nine months of fiscal year 2021/22 was well ahead of the underlying global chocolate confectionery market (+1.4%)2. Volume growth continued to be supported by all Regions
(EMEA +9.8% , Americas +6.6% , Asia Pacific +14.7% ), with positive contributions from the Group’s key growth drivers Gourmet & Specialties ( +27.4% ), Emerging Markets (+8.7%) and Outsourcing (+6.9%). Sales volume in Global Cocoa grew by +3.5% to 339,437 tonnes.

Update on entry of salmonella-positive lecithin in Wieze factory

Barry Callebaut detected on June 27, 2022, at its Wieze factory in Belgium a salmonella-positive chocolate production lot and quickly identified a lecithin batch from a supplier as the root cause. In response, Barry Callebaut halted all chocolate production at the Wieze factory on June 29, 2022, as a precautionary measure, which prevented affected chocolate products from entering the retail food chain. The cleaning of the affected chocolate lines is progressing well. As a result, the first lines are foreseen to restart production as of early August 2022, with a gradual ramp-up to full capacity over the following weeks. Though the full financial impact of the incident is still being assessed, the Group expects it to be notable for the financial results in the fourth quarter 2021/22.

Food safety is paramount for Barry Callebaut and this is an exceptional incident. I want to thank all teams involved for the speed and diligence with which they are driving the cleaning and the gradual restart of the Wieze factory. We are working closely with our customers and fully understand that this incident is disruptive to their planning. We want to thank them for the good cooperation and understanding.

Our strong innovation pipeline and continued drive for new opportunities make us confident to deliver on our mid-term guidance. Our confidence is bolstered by our deep and broad product portfolio and our global footprint.

Expansion: In May 2022, Barry Callebaut opened Taycan, the Group’s first cocoa bean buying, cleaning, drying and export facility in Duran, Ecuador. The state-of-the-art facility, a home to the Group’s employees in Ecuador, fits Barry Callebaut’s strategy to continuously build its integrated supply chain.
Also in May 2022, Barry Callebaut officially inaugurated its CHOCOLATE ACADEMYTM Center in Casablanca, Morocco. It is the second CHOCOLATE ACADEMY Center on the African continent and part of the global network of now 26 CHOCOLATE ACADEMY Centers, where chefs and artisans can showcase and develop their talent and skills. In April 2022, Barry Callebaut announced that it will build a specialty chocolate factory in Ontario, Canada, with an initial annual production capacity of over 50,000 tonnes, expanding its North American footprint. To staff this new state-of-the-art facility, Barry Callebaut expects to create over 200 new jobs.
In addition, Barry Callebaut expanded its regional customer proximity by strengthening its Gourmet distribution network in South Africa and Latin America. In South Africa Barry Callebaut set up its own local network of distributors and expanded its Gourmet product portfolio. In Latin America Barry Callebaut signed a long-term distribution agreement for its global Gourmet brands with Levapan, expanding its presence to Ecuador and Colombia.

Innovation: In the period under review, Barry Callebaut received two awards for its innovation capabilities at the 2022 Sweets & Snacks Expo Awards Ceremony in Chicago, US. The National Confectioners Association (NCA) named Barry Callebaut winner of the 2022 “Ruby Award for Supplier Innovation” in recognition of its WholeFruit chocolate, a unique couverture chocolate made from 100% pure and upcycled cacaofruit. The award “Best in Show” was granted to “Trü Frü Nature’s Strawberries”, frozen strawberries immersed in Ruby cacao.

Cost Leadership: Barry Callebaut announced in May 2022 its plans to open a Business Excellence Center in the greater Kuala Lumpur area, Malaysia. Expected to be fully operational in the third quarter of 2022, it will bundle shared services in Finance and other corporate services, such as Customer Service and Information Technology, for Region Asia Pacific.
In June 2022, Barry Callebaut was awarded by the Lean Analytics Association (LAA) the “Lean Diamond Award 2022” for its culture of continuous improvement across its three Brazilian sites in Extrema, Illheus and Itabuna.
Furthermore, after exploring all alternatives to better balance capacity and demand in the UK, Barry Callebaut has decided to close its factory in Moreton, UK. The decision allows the Group to continue to invest in the modernization of its factory footprint in the important UK market.

Sustainability: In May 2022, the Group further strengthened its cocoa farming research capabilities for the benefit of cocoa yield, sustainability and quality, through the establishment of its “Farm of the Future” in Ecuador. Once fully operational, the 640-hectare property located in the Cerecita Valley will employ approximately 80 people and serve as a dedicated hub to power research in support of cocoa farming resilience and productivity, thus feeding into Barry Callebaut’s Farm Services program.

Region EMEA – Strong volume growth continued
Sales volume in Region EMEA (Europe, Middle East and Africa) continued its strong growth momentum in the third quarter (+6.5%), despite a high comparison base in the prior-year quarter. Volume increased by +9.8% to 808,479 tonnes in the first nine months of fiscal year 2021/22. Excluding the first-time consolidation of Europe Chocolate Company (ECC) since September 2021, organic volume growth was +8.6%, well ahead of the regional chocolate confectionery market (-0.2%)3. Food Manufacturers continued its healthy volume growth, supported by Western Europe and the ramp-up of outsourcing volume in Eastern Europe. Gourmet & Specialties continued to grow strongly across the Region, against a strong prior-year third quarter. Sales revenue in the Region amounted to CHF 2,577.0 million, up +16.9% in local currencies (+11.5% in CHF).

Region Asia Pacific – Accelerating momentum
Sales volume growth momentum in Region Asia Pacific further accelerated in the third quarter (+16.7%), despite occasional COVID-19 related lockdowns at local level. Volume increased by +14.7% to 121,517 tonnes in the period under review, well above the underlying regional chocolate confectionery market (+10.8%)3. Both Food Manufacturers and Gourmet & Specialties contributed to the strong achievement, led by key markets such as China, India, Indonesia and Japan. Despite upfront investments in growth, Australia had a slow start. Sales revenue amounted to CHF 412.7 million, up +22.4% in local currencies (+22.9% in CHF).

Price developments of key raw materials
During the first nine months of fiscal year 2021/22, terminal market4 prices for cocoa beans fluctuated between GBP 1,636 and GBP 1,877 per tonne and closed at GBP 1,765 per tonne on May 31, 2022. On average, cocoa bean prices increased by +3.9% versus the prior-year period. While the global bean supply and demand expectations for 2021/22 indicate a deficit, large stocks carried from prior-year surpluses allow for sufficient bean supply, which should lead to an overall more balanced situation.
Sugar prices in Europe further increased on average by +46.1% during the period under review, mainly due to low stocks and robust demand amidst rising cost inflation. The world market price for sugar increased on average by +21.9%. This was due to a substantially lower Brazilian crop and a macro-environment impacted by high energy prices and geopolitical uncertainties.
Dairy prices increased on average by +52.0% during the first nine months of fiscal year 2021/22. This was due to low milk supply throughout the period, triggered by poor weather conditions in key producing regions and exacerbated by high input cost inflation for dairy farmers across the globe. 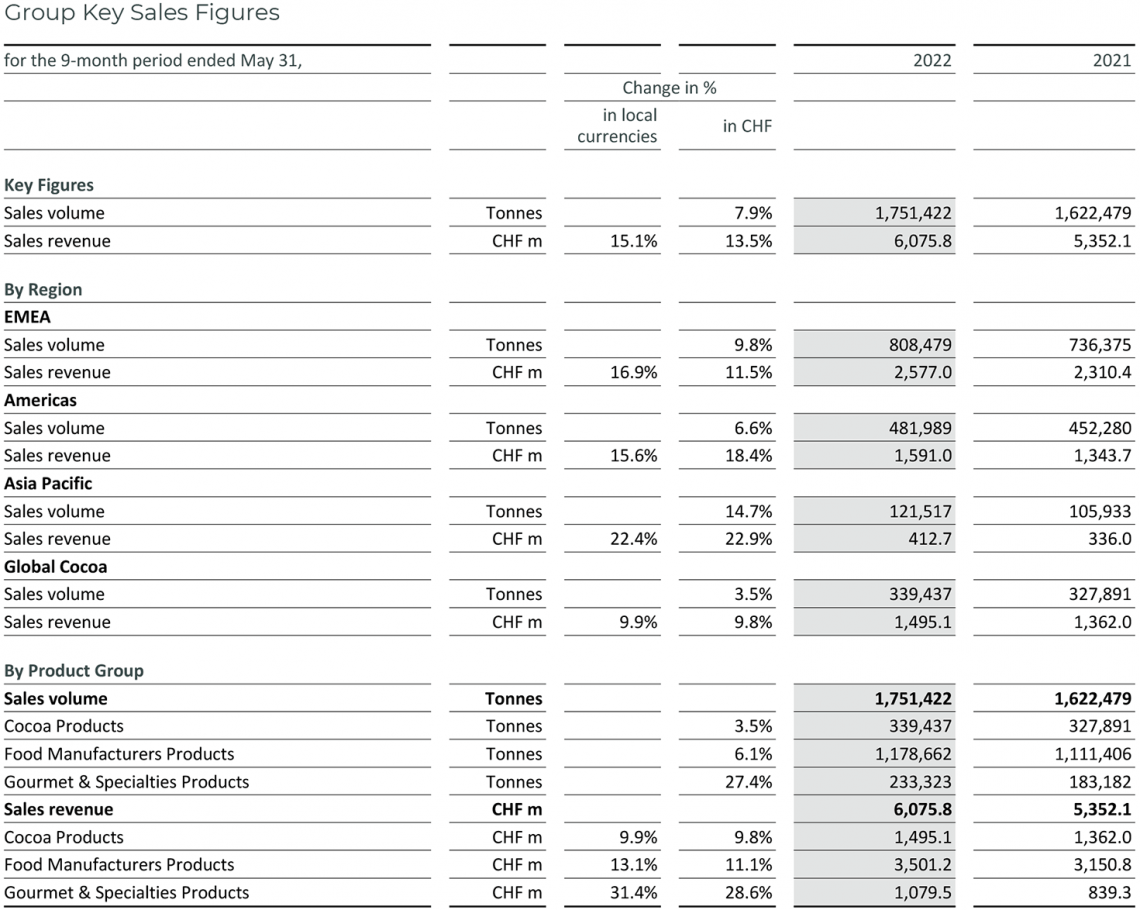