1 Compared to prior-year Operating profit (EBIT) and Net profit recurring.
2 On average for the 3-year period 2020/21 to 2022/23: 5-7% volume growth and EBIT above volume growth in local currencies, barring any major unforeseeable events.

In fiscal year 2020/21, we have returned to our healthy growth path, with good profitability and strong Cash flow generation. Growth outpaced the underlying markets, with all Regions and Key growth drivers contributing to the good results. I want to thank all colleagues at Barry Callebaut for these results. They are living our corporate values and are the foundation of our success in the past 25 years.

In fiscal year 2020/21 (ended August 31, 2021) the Barry Callebaut Group – the world’s leading manufacturer of high-quality chocolate and cocoa products, achieved healthy volume growth of +4.6% to 2,191,572 tonnes. The chocolate business surpassed the pre-COVID levels of 2018/19 and with a volume growth of +6.5% clearly outpaced the underlying global chocolate confectionery market (+1.8%)4. Volume growth was supported by all Regions (Asia Pacific +8.7%, Americas +7.9%, EMEA +5.5%) and all key growth drivers, Outsourcing (+4.5%), Emerging Markets (+9.7%) and a particularly strong performance of Gourmet & Specialties (+18.3%). Sales volume in Global Cocoa improved in the second half of the year, reducing the decline for the year under review to –2.6%.

Gross profit grew faster than sales volume and amounted to CHF 1,147.2 million, up +10.8% in local currencies (+7.9% in CHF) compared to prior year. The healthy volume growth, in particular in Gourmet & Specialties, had a positive impact on the mix.

Operating profit (EBIT) increased by +18.9%5 in local currencies (+15.4%5 in CHF) and amounted to CHF 566.7 million, impacted by a currency headwind of CHF –17 million. EBIT growth significantly exceeded the volume growth, supported by all Regions and a positive product and customer mix.
The Group’s EBIT per tonne improved to CHF 259, an increase of +13.7%5 in local currencies (+10.4%5 in CHF).

Net working capital increased to CHF 1,241.8 million, compared to CHF 1,192.0 million in prior year. The increase was below the Group’s volume growth, thanks to good working capital management. The effect of receivables increasing in line with regained business momentum was largely offset by good inventory management and lower payables.

Outlook – On track to deliver on mid-term guidance

Smart growth will continue to be at the heart of our long-term strategy execution with a focus on returns and cash generation. By leveraging our global footprint, industry-best innovation, cost leadership, and impactful sustainability solutions, we are on track to accelerate up the value ladder. This makes us confident we will deliver on our mid-term guidance.

Growing the world of chocolate and cocoa for 25 years

Innovation: The first fully segregated dairy-free production facility in Norderstedt, Germany, expanded its range of plant-based indulgence for special dietary requirements, such as chocolate certified “Halal” or “Kosher Badatz”. Production started in April 2021 and will entice customers across Region EMEA.
In October 2021, Barry Callebaut's new drinking chocolate powder with less sugar made its debut in Taiwan. This tasty innovation, with only four ingredients and minimal processing, comes with the sweet goodness of monk fruit, a plant trusted in Asia for centuries.
Furthermore, in Japan, Barry Callebaut developed a low carb chocolate with no added sugar for a leading brand in protein bars, which made its debut in early October 2021.
In the same month, Barry Callebaut organized “Treat Tomorrow Live”, a “glocal” customer gathering, bringing together on a virtual platform customers, brands and artisans from across the globe. “Treat Tomorrow” addresses pressing consumer questions on health, next generation indulgence, plant-based, sustainability and the climate.
Also in October, Barry Callebaut leveraged its deep knowledge of the cacaofruit and unlocked a new fruit drink category by introducing “Elix”, the first nutraceutical fruit drink. Elix’ accompanying health claim related to the naturally present cacaofruit flavanols and their effect on circulatory health is approved under the EU Nutrition and Health Claims regulation.

Cost leadership: In October, Barry Callebaut inaugurated “The Chocolate Box”, its new Global Distribution Center in Lokeren, Belgium, the largest chocolate warehouse globally. It is also the most sustainable as it is fully energy-positive. “The Chocolate Box” will serve as a logistical global hub for all packed chocolate and decorations products from the Group’s Belgium-based factories in Wieze and Halle. The concentration of Barry Callebaut’s logistical capacities, together with state-of-the-art storage technology, will increase the efficiency of Barry Callebaut’s global product distribution and accelerate customer service.

Sustainability: In August, Barry Callebaut was recognized by Sustainalytics for the third consecutive year as an industry leader in managing Environmental, Social and Governance (ESG) risks in its chocolate supply chain. Sustainalytics is a leading company assessing industry’s efforts to manage the ESG risks in supply chains. In addition, Barry Callebaut hosted its first dedicated ESG Roadshow to present and discuss these topics with investors.
Also in August, Barry Callebaut, together with Nestlé and Proforest, launched a scorecard to drive sustainable coconut oil production. The supplier scorecard allows Barry Callebaut and other companies to assess sustainability risks at the sourcing locations, set clear improvement targets and introduce incentives for suppliers to make improvements. By 2022, Barry Callebaut intends to roll out this assessment with all of its coconut oil suppliers.
In July, Barry Callebaut, in collaboration with Gold Standard and Agolin, developed a new methodology to quantify and certify carbon insetting for dairy ingredients within its chocolate supply chain.

Region EMEA – Back on healthy growth path with sound profitability

Sales volume in Region Americas increased by +7.9% to 610,133 tonnes in fiscal year 2020/21, well ahead of the underlying regional chocolate confectionery market (+2.5%)6. Food Manufacturers continued to grow strongly in particular with large corporate accounts in North America. The extension of the long-term supply partnership with Hershey underscores how Barry Callebaut’s reliability and premium chocolate expertise make it the partner of choice for leading industry players in the Region. Gourmet & Specialties’ volume continued to accelerate across the Region, leading to clear double-digit growth in the year under review. Sales revenue increased by +10.8% in local currencies (+4.0% in CHF) and amounted to CHF 1,830.3 million. Operating profit (EBIT) increased +8.4% in local currencies (+2.3% in CHF) to CHF 186.6 million, reflecting the strong volume growth and improving mix.

In Region Asia Pacific the good growth momentum continued with +8.7% to 138,396 tonnes, despite regionally reinstated COVID-19 restrictions. The underlying regional chocolate confectionery market grew +7.1%6. Food Manufacturers’ volume growth continued to be broad-based. Gourmet & Specialties’ volume growth is back in the solid double-digit range, supported by global and local brands. Sales revenue amounted to CHF 444.0 million, up +15.4% in local currencies (+10.9% in CHF). Operating profit (EBIT) grew well ahead of volume at +39.5% in local currencies (+33.4% in CHF) to CHF 57.0 million on the back of good growth momentum and an improving mix.

Sales volume in Global Cocoa amounted to 445,719 tonnes, a decline of –2.6% compared to prior year. Sales revenue reached CHF 1,804.8 million, up +6.1% in local currencies (–0.7% in CHF). The focus on ’smart growth’ mitigated the impact of the unfavorable market environment, however Operating profit (EBIT) was impacted by higher energy costs in West Africa as well as higher global freight costs. This resulted in an EBIT of CHF 86.5 million, compared to CHF 94.9 million EBIT recurring7 in prior year. Excluding the above-mentioned additional cost, EBIT per tonne grew by +4.8% in local currencies (+1.8% in CHF) to CHF 211 (prior year CHF 208).

During fiscal year 2020/21, cocoa bean prices fluctuated between GBP 1,607 and GBP 1,869 per tonne and closed at GBP 1,757 per tonne on August 31, 2021. On average, cocoa bean prices decreased by –7.0% versus prior year. The global bean supply and demand shifted to a large surplus in 2020/21. On one hand, demand was subdued related to the COVID-19 pandemic. On the other hand, exceptional good crop levels in key origins contributed to increased cocoa bean supply.

Due to the ongoing COVID-19 pandemic, the AGM 2021 of Barry Callebaut AG will take place without personal attendance of shareholders. To protect the health of its shareholders and employees, voting rights can be exercised solely through the independent proxy. Details can be found on the Group website and in the invitation to the AGM which will be sent by mid-November 2021. 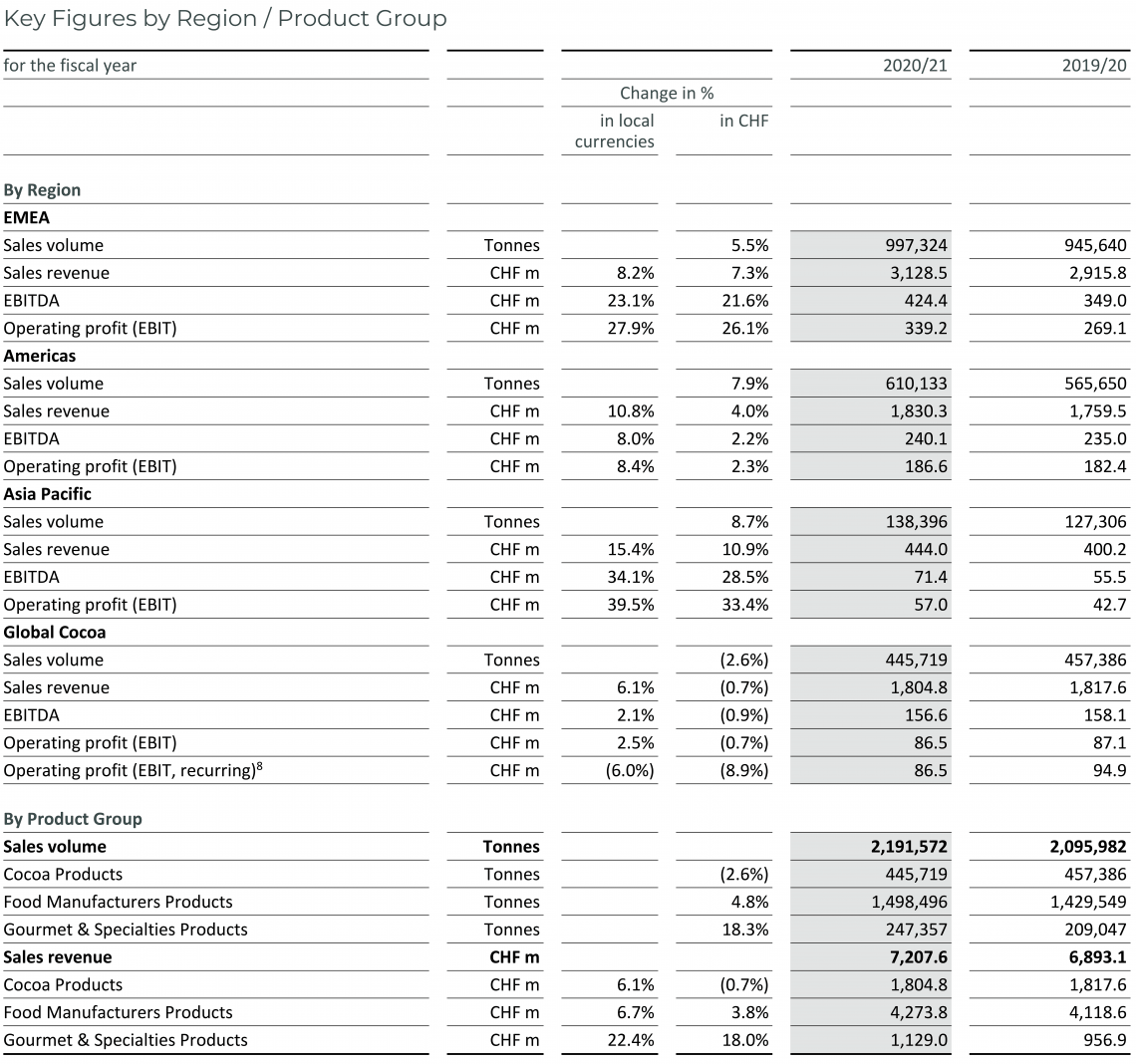 8 2019/20 Operating profit (EBIT) recurring excludes the cost of CHF –7.8 million for the closure of the cocoa factory in Makassar, Indonesia. 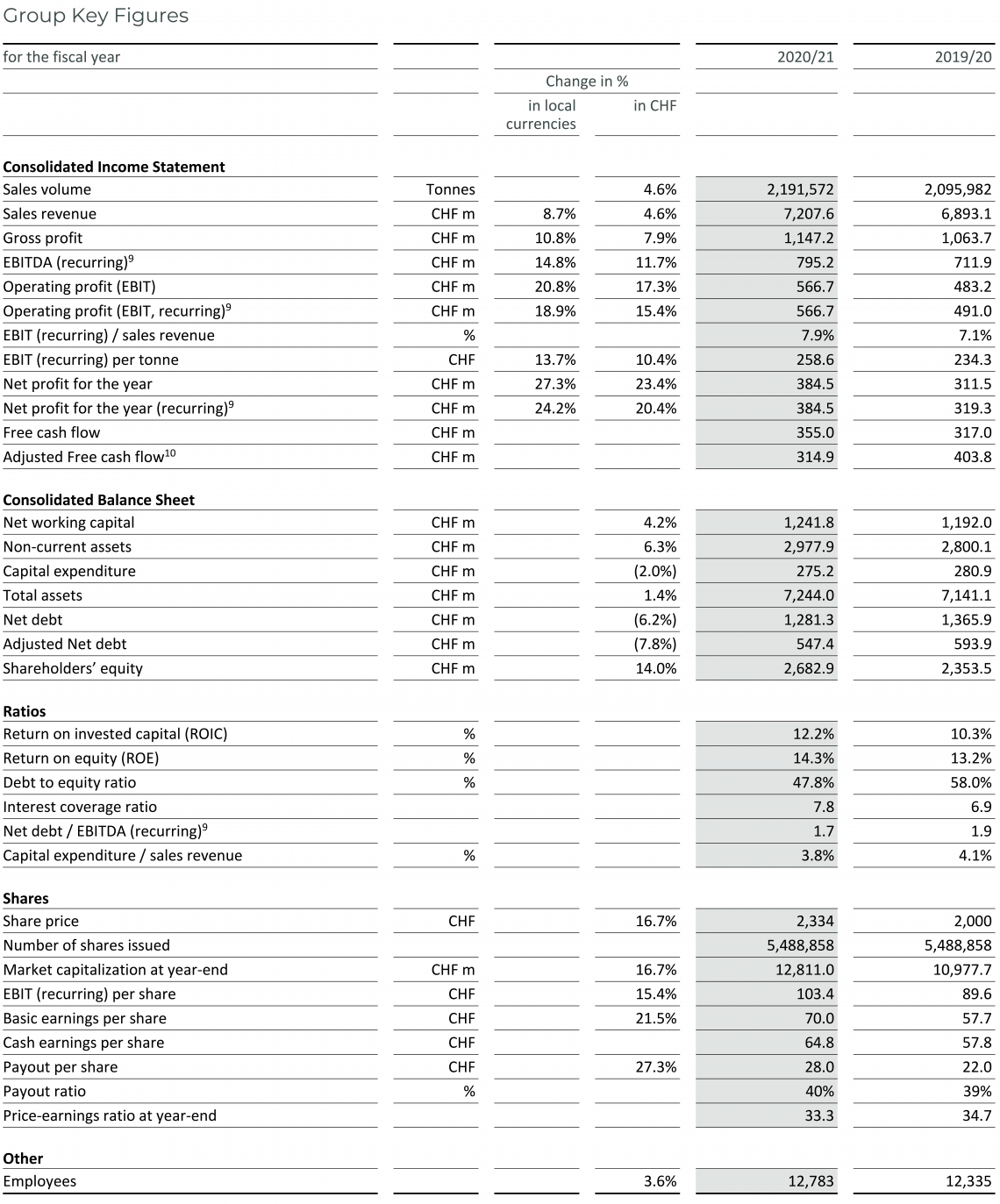 With annual sales of about CHF 7.2 billion (EUR 6.6 billion / USD 7.9 billion) in fiscal year 2020/21, the Zurich- based Barry Callebaut Group is the world’s leading manufacturer of high-quality chocolate and cocoa products – from sourcing and processing cocoa beans to producing the finest chocolates, including chocolate fillings, decorations and compounds. The Group runs more than 60 production facilities worldwide and employs a diverse and dedicated global workforce of more than 12,500 people.